A hovercar was a car that utilized some form of gravity-manipulating technology to "hover" over the ground, and drive through streets similar to traditional automobiles.

On Vulcan, hovercars called desert fliers were a common sight on the streets of ShiKahr in the 2230s. (TAS: "Yesteryear")

In 2259 of the alternate reality, Thomas Harewood owned a hovercar. He used the vehicle to drive himself and his wife Rima to the Royal Children's Hospital to see their daughter, who was terminally ill. (Star Trek Into Darkness)

In 2269, when Harry Mudd was attempting to sell his love potion to the miners on Motherlode, a number of hover cars and trucks were seen in the parking lot. (TAS: "Mudd's Passion")

In 2369, Alexander Rozhenko played with a toy that might have been a remote-controlled hovercar, although it is not certain what the toy was called. (TNG: "Rascals")

In 2371, when the USS Voyager brought aboard a 1936 Ford truck, Harry Kim mistook it for an early hovercar. However, Tom Paris stated that particular automobile was about a century too early for that to be the case. (VOY: "The 37's")

In the anti-time future, shortly after Jean-Luc Picard and Geordi La Forge arrived in England with the intention of seeing Data, a hovercar was driving to Cambridge University, where Data was living. (TNG: "All Good Things...")

In Greater Boston in the year 2399, Dahj Asha was walking down a sidewalk next to a street that a hovercar was driving on. Later, a number of hovercars were seen driving by the the Eiffel Tower in Paris, and a few others were driving down a street where Dahj was running before she used a holographic communicator to call her "mother". (PIC: "Remembrance")

A parked hovercar (or possibly a shuttle) on Vulcan

A desert flyer driving past Sarek and Amanda Grayson's house 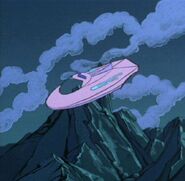 The interior of Thomas and Rima Harewood's hovercar

A parking lot with a few hover vehicles

Harry Mudd standing next to a hovercar

A hovercar on Motherlode

A hovercar driving to Cambridge University in the anti-time future

A hovercar driving down a Greater Boston street

A hovercar on a Paris street at night in 2399

The script of Star Trek: First Contact mentioned the hulks of now-useless hovercars lying corroded in the streets.

Wheeled vehicles apparently continued to survive in specialized roles even after hovercars became ubiquitous. Examples include the wheeled truck-like vehicle used by the Arctic Archaeology Team in 2153 in ENT: "Regeneration" and the Argo buggy in use by Starfleet in the late 24th century in Star Trek Nemesis.

The hovercars shown in the episode "Remembrance" and a few other episodes were actually slightly redesigned models of the shuttles from Star Trek: Discovery. The same seems to be the case for most of the the aircars and other shuttlecraft.