View source
This article might be inaccurate This page has been identified as needing attention. Please visit the article's talk page to see what needs fixing and feel free to edit this page to assist with this task.

Hunters' homeworld (Gamma Quadrant)
For additional meanings of "Hunter", please see Hunter.
"I live to outwit the hunters… for another day… to survive until I die with honor."
– Tosk, 2369 ("Captive Pursuit")

The Hunters were a humanoid species from the Gamma Quadrant, from the same homeworld as the Tosk. They were characterized by pale yellow skin, a cleft upper palate, and corrugated foreheads.

In the Hunters' culture, it was a socially acceptable way of life to chase and kill another sentient species known as the "Tosk". In the past, the Hunters had developed genetic engineering to make the Tosk worthy prey – a prey they came to respect and even admire.

In 2369, a group of Hunters arrived in the Alpha Quadrant via the Bajoran wormhole in pursuit of a Tosk. Their ship was small, but its technology was totally unknown to the Federation and had a weapon that was capable of bombarding a target with an unusual type of radiation, which, when fired on space station Deep Space 9, was effective in reversing the polarity of the station's shield frequencies, allowing the Hunters to transport onto the station and attempt to locate the Tosk. After hearing that their culture of hunting a sentient species contradicts Federation principles, they decreed that the Bajoran wormhole would be off-limits for future hunts, but the Tosk they were hunting escaped with the aid of Miles O'Brien to continue the hunt. (DS9: "Captive Pursuit")

Armed with energy crossbows powerful enough to blast through the door to DS9's brig in one shot, the Hunters were formidable opponents in a fire-fight. They dressed in a type of protective suit that shielded them from the full effects of stun settings on phasers. In addition, they wore deflector shields on their left arms and specialized helmets which were able to locate an invisible Tosk.

In the script notes, this species' garb was described thus; "Our first impression is of men without faces. They wear high-tech helmets… designed with detection and tracking gear… their bodies dressed in a formal costume for the occasion – think of them as the fox hunters – they each carry special weapons that look like high-tech laser crossbows… along their arms are built-in metallic shield generators…." 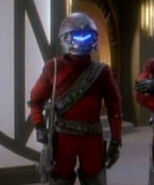 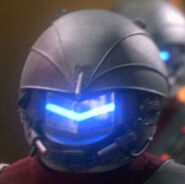 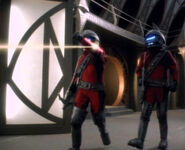 This species was not given a formal designation or descriptor, but rather was simply described as such by Tosk when he stated, "I live to outwit the hunters," and later by O'Brien when he said "these… hunters." In every case, the term was written in the script in lower case, indicating the occupation, and not a formal name. The lead hunter was identified in the script as "The Hunter", and at one point, one of his cohorts as "one of the hunters".

A pre-production sketch of an original design for the Hunters in The Making of Star Trek: Deep Space Nine (p. 35) indicated that the species was called the "Drai". Here, it was explained that "this complex design for what would become the Hunters of 'Captive Pursuit' was made more cost-effective simply by changing the description of the alien within the helmet to: 'a rather mundane humanoid face, not far off human'."

The name Drai is also used for the Hunters' species in the Star Trek Adventures - Gamma Quadrant sourcebook.

Each of the Hunters was represented with a wig and a face mask that blended into the actor's face at their upper lip. Michael Westmore talked about the creation of the make-up for the Hunters, contrasting them with the Tosk; "They had a much more simpler make-up, which was based on much more of a humanoid type of a look [….] It was a really nice make-up to complement, I think, the Tosk make-up." ("Michael Westmore's Aliens: Season One", DS9 Season 1 DVD special features)

Gerrit Graham commented: "I'm trying to think if that was the first rubber-head thing I ever did. Well, I guess it must have been the first one that was really extensive. If the cast and crew were called at 8, you had to get there at 5:30 or 6, so they could start applying the makeup and prosthetics. The application time gets shorter as the show goes on, because they get more practiced at it, but the first couple of times it is laborious. Then, you have to get it taken off at the end. You can't just pull it off your face. That takes a lot of patience. Either that, or it takes not having had enough sleep the night before, so you just go to sleep in the makeup chair." [1]

In the episode "Broken Link", a Hunter was supposed to appear – thus establishing that the Hunters are members of the Dominion – but this idea was dropped. The Hunter was to have been a character taking the helm of the USS Defiant, but this was changed to the Jem'Hadar character of Amat'igan.

According to the reference book Star Trek: Star Charts (p. 74), the system where this species came from wasn't identified. Their homeworld orbited a K-class star.