A hypospray (colloquially, hypo) was a medical device used to inject liquids into the body. The system used a noninvasive transport mechanism of compressed air to transfer the injectant from the device into the subdermal layer below the skin of the body, or artery. This was done without the use of a needle, ensuring that the skin was not punctured during use, thus reducing the risk of infection or pain at the site of injection. Various drugs could be used, inserted into the hypo in vials attached to the end of the instrument.

Doctor Phlox used hyposprays many times such as when he treated T'Pol's tension headache with an analgesic or Lieutenant Malcolm Reed's gastrointestinal distress symptoms. (ENT: "Breaking the Ice", "The Catwalk")

The 23rd century Federation hypospray resembled the intravenous needles of previous centuries, while the 24th century version of the device was more compact, employing an angled head and rounded tip to transfer the drug more easily. Controls at the injection head set the dosage to be injected. (TOS: "Amok Time"; TNG: "Haven")

The typical injection site used is the side of the neck, to the carotid artery, but the hypospray can inject even through clothing. Unlike hypodermic needles, the hypospray can be used on multiple patients without worries of spreading blood-borne illnesses. (TNG: "Angel One"; Star Trek: First Contact; VOY: "Parturition", "Endgame")

A hypospray could also be used to collect air samples in order to test it, or to condense air and store it for later use. (VOY: "Parturition"; TNG: "Genesis") 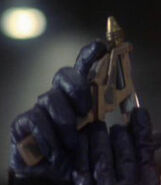 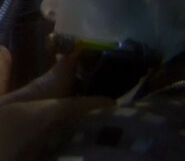 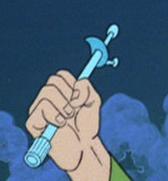 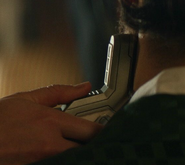 Hypospray, 2390s
Add an image to this gallery

Retrieved from "https://memory-alpha.fandom.com/wiki/Hypospray?oldid=2545879"
Community content is available under CC-BY-NC unless otherwise noted.