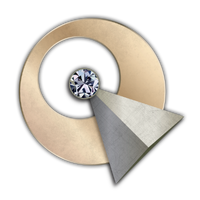 IDIC was an acronym for Infinite Diversity in Infinite Combinations, the basis of Vulcan philosophy, celebrating the vast array of variables in the universe. The philosophy, as well as the Vulcan people, were often represented by a triangle-over-circle insignia, referred to as an "IDIC." (TOS: "Is There in Truth No Beauty?", DIS: "Will You Take My Hand?")

In the Vulcan language, the term for "infinite diversity in infinite combinations" was Kol-Ut-Shan. (VOY: "Gravity")

IDIC symbols were in use at least as early as the 4th century AD, as one appeared on Surak's katric ark. According to Syrran, the symbol represented Surak's enlightenment atop Mount Seleya. (ENT: "The Forge")

After the reunification of the Vulcans and Romulans, the IDIC was combined with the Romulan logo. This new symbol was worn as a badge on the clothing of the President of Ni'Var, the Peers, and other top officials in Ni'Var society in the 32nd century. (DIS: "Unification III")

In 2269, James T. Kirk reminded a giant clone of Spock of the concept, asking him whether an army of Spocks could defy this concept by attempting to impose peace and Phylosian philosophy on others. (TAS: "The Infinite Vulcan")

In the 23rd century, the flag of the Vulcan people was an IDIC over a red background. (DIS: "Will You Take My Hand?")

When referring to the symbol in the English language, it was pronounced "ih-dihk". (TOS: "Is There in Truth No Beauty?")

The IDIC was featured several times at the Vulcan monastery at P'Jem. It appeared on the wooden arch at the doorway of the monastery and was visible on stones which were used by Jonathan Archer for creating a map of the catacombs. The IDIC symbol was also imprinted on the Stone of J'Kah. (ENT: "The Andorian Incident")

In 2154, T'Les smuggled a holographic map to her daughter T'Pol inside an IDIC medallion pendant. (ENT: "The Forge") On 22 January 2155, T'Pol hung the same medallion on the side of an incubator containing her baby daughter, Elizabeth. Following the child's death, T'Pol was holding the medallion close to her in her quarters when the baby's father, Charles Tucker III, arrived. Moments later, they held hands over the medallion. (ENT: "Terra Prime")

In the script of "The Forge", this IDIC was described as "an older style than others we've seen, with Vulcan script engraving and a blood-red jewel." In the final draft script of "Terra Prime", the medallion was brought by Tucker into T'Pol's quarters, rather than being with her upon his arrival, and no mention of it was made when the script described the couple holding hands.

Michael Burnham and other graduates of the Vulcan Science Academy each wore an IDIC badge on their graduation day on Vulcan. (DIS: "Lethe")

These IDIC badges were 3D printed and painted by hand in Toronto, Canada. ("Star Trek Exhibition" at DIS: "Si Vis Pacem, Para Bellum" screening, Millbank Tower, London, UK, 5 November 2017) One of these badges, together with another Vulcan badge of a type which the VSA graduates also wore, were featured at Star Trek: The Exhibition in Blackpool, UK, and are now on a world tour, first shown at a screening of the episode "Si Vis Pacem, Para Bellum" at London's Millbank Tower on 5 November 2017. There, a placard describing the exhibit stated that the IDIC "pendants" were worn not only by the graduates of the Vulcan Science Academy but also by "professors and high scholars."

On formal occasions, Spock wore his IDIC medallion in pin form as part of his Starfleet dress uniform. During a dinner function aboard the USS Enterprise, Doctor Miranda Jones had noticed Spock's Vulcan IDIC pin on his dress uniform. She inquired if it was to serve as a reminder to Jones that, as a Vulcan, Spock could mind link with the Medusans far better than she could. Spock noted, on the contrary, that he donned it to honor Dr. Jones and her achievements. (TOS: "Is There in Truth No Beauty?")

In 2285, as captain of the Enterprise, Spock had a large IDIC mosaic on a wall in his quarters, next to his meditation nook. (Star Trek II: The Wrath of Khan, Star Trek III: The Search for Spock)

The Vulcan ship T'Vran had IDIC emblems on the back wall of the bridge. (DS9: "Vortex")

Vulcan IDIC pins were considered collectible merchandise in the retail markets of the 24th century, not easily acquired in the Bajor sector. In late 2370, Quark listed Vulcan IDIC pins as plausible items that he could sell over the monitors on board of Deep Space 9 if given permission by Commander Benjamin Sisko. As well as IDIC pins, other collectibles Quark listed that he could sell at a significant discount included Andorian jewelry and Bolian crystalsteel. (DS9: "The Jem'Hadar")

The Logicians, an all-Vulcan baseball team formed from members of the crew of the USS T'Kumbra, featured the IDIC on their baseball caps. (DS9: "Take Me Out to the Holosuite")

While posing as a Vulcan commodore, Oh kept a decorative box with an IDIC on her desk among other Vulcan decorations. (PIC: "Maps and Legends")

In preparing a room for the T'Kal-in-ket aboard the USS Discovery, the crew had placed the IDIC symbol on one of the walls, along with other symbols, which represented the three major factions on Ni'Var. (DIS: "Unification III")

The invention of the IDIC by Gene Roddenberry caused friction between him and Leonard Nimoy, who saw it as a cheap ploy to sell replica merchandise to fans. (I Am Spock, 1st ed., pp. 66-67) The symbol, first introduced in "Is There in Truth No Beauty?", was designed by William Ware Theiss. [1] Michael and Denise Okuda have credited Roddenberry himself with designing the symbol, though Theiss' design sketches as published in Star Trek: The Original Series Sketchbook and The Art of Star Trek seem to contradict this. (ENT: "The Forge" text commentary; ENT Season 4 DVD special feature; Star Trek Encyclopedia (4th ed., vol. 1, p. 357))

In the IDIC seen from the 4th century, the triangle portion is perfectly vertical and elongated, in contrast to the angle it is displayed at in the 22nd century forward.

In the Vulcan Jellyfish ship from Star Trek, the cockpit appears to form an IDIC with the chair, the controls, and the circular window. The IDIC as a design motif is continued in the Star Trek video game, where it forms the shape of every Vulcan airlock.

A wall decoration displayed in the Vulcan High Command in "Awakening" and "Kir'Shara" was sold on the It's A Wrap! sale and auction on eBay. The image, resembling a vertical IDIC, had the auction description "the panels form an image of the sun rising over Mount Seleya". [2]

The Star Trek Encyclopedia (4th ed., vol. 1, p. 357) stated the IDIC emblem had come to be used as a Vulcan national symbol.