A list of the Klingon personnel of the IKS Amar in the 2270s.

The unidentified actors for the characters below may be any of the following, who were all listed as Klingon crewmen: Jimmie Booth, Bill McTosh, David Moordigian, and Craig Thomas.

The captain was the commanding officer of the Amar, the lead vessel of a squadron of Klingon battle cruisers that attempted to intercept and was later destroyed by V'ger. (Star Trek: The Motion Picture)

The Klingon captain was portrayed by Mark Lenard, who is better known as Sarek, Spock's father. He was initially offered the role via a phone call from Gene Roddenberry. "I never thought of playing a Klingon," Lenard admitted, "but I said, 'Sure, I would love to.'" The actor found his makeup extremely uncomfortable while playing the part. (Starlog #117, p. 48)
According to at least one version of the script, the Klingon captain was called "Commander Barak (β)".
The Star Trek Customizable Card Game gives his name as Krase. This was obviously meant as an in-joke, as it is an anagram of the name of Lenard's better-known role of Sarek. The novel Forgotten History gives his full name as Barak, son of Krase.

This Klingon was played by stuntman Tom Morga in his very first Star Trek role.
The Star Trek Customizable Card Game gives his name as Komal. There, he is listed as the chief surgeon of the Amar. [1] 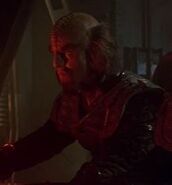 The helmsman and navigator. (Star Trek: The Motion Picture)

The helmsman was played by actor Joel Schultz; the navigator by stunt actor Joel Kramer.
The Star Trek Customizable Card Game gives the helmsman's name as Karnog. However, he is identified as the ship's science officer. There, he is listed as the science officer of the Amar who tried to analyze the V'ger data. [2]

This officer approached the seated navigator and helmsman when the Amar was slowly coming closer to V'ger. (Star Trek: The Motion Picture)

This officer was played by Tony Rocco.

These two officers were seated in chairs with viewscreens that controlled the Amar's weapons. (Star Trek: The Motion Picture)

These officers were portrayed by one of the unspecified actors listed above. 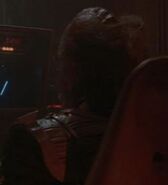 Played by a unknown actor
Français
Community content is available under CC-BY-NC unless otherwise noted.
Advertisement