These two Klingon crewmembers worked on the bridge of the Hegh'ta in early 2368 when the ship was under attack by forces loyal to the House of Duras. (TNG: "Redemption II")

Both background actors later appeared in several scenes in the Klingon nightclub and in the Great Hall. 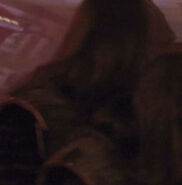 Played by Mark Lentry
Add an image to this gallery

These two Klingon officers died on the bridge during an attack on the Hegh'ta in early 2368. They were brought off the bridge by a fellow officer. (TNG: "Redemption II")

The two actors later appeared as other Klingons in scenes in the Klingon nightclub and the Great Hall. 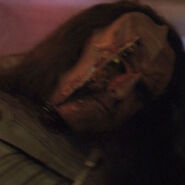 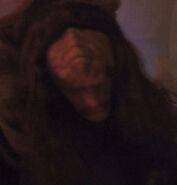 Played by S. Moriarty
Add an image to this gallery

This helmsman served on the Hegh'ta in 2368. During an attack by forces loyal to the House of Duras, Kurn ordered him to fly the ship into the corona of a star. At first he protested, but Kurn rebuked him. The ship lured its enemies into the corona, and than went to warp which caused a solar flare that destroyed the Duras ships. (TNG: "Redemption II")

The Hegh'ta helmsman was played by Stephen James Carver.
The
Star Trek Customizable Card Game gives his name as Gorath.
Retrieved from "https://memory-alpha.fandom.com/wiki/IKS_Hegh%27ta_personnel?oldid=2101551"
Community content is available under CC-BY-NC unless otherwise noted.