This male bridge officer, who did not wear a typical beard, was on the bridge of the Klothos when the ship was pulled into the Delta Triangle.

He sat at one of the bridge stations, next to which Kaz stood, when the latter officer informed Kor that their scanners indicated that the USS Enterprise's shields were totally depleted.

He remained at the same post as the Klothos made its lone failed to escape the Delta Triangle. (TAS: "The Time Trap") 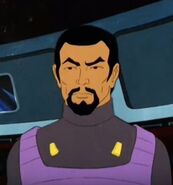 These male exchange officers were among the Klothos science team that was assigned to the Enterprise to assist in merging the navigation and propulsion systems of the two ships.

These officer took advantage of the absent security near the Enterprise's dilithium vault when they were discovered, by the tardy Bell and Gabler, "poking around".

The two Starfleet crewmen escorted the two exchange officers to the bridge to report their activities. Though the first officer claimed merely that "we were lost", Spock interjected (while nonchalantly performing a noninvasive mind probe of the Klingons to determine their true intentions) while offering to take "this young man" to his destination, engineering deck 5. (TAS: "The Time Trap")

The first was voiced by George Takei. He was identified in the script simply as "Klingon #1".
The second was drawn to strongly resemble Kaz, but was not identified whatsoever in the script or dialog.

This woman was among the crew when the Klothos was pulled into the Delta Triangle.

During an event held in the recreation room aboard the Enterprise, she was approached and asked to dance by Doctor Leonard McCoy; her agreement to dance elicited Kaz's ire, who in turn, warned McCoy away from her, stating "That's my woman!" McCoy pleaded innocence, saying all he did was ask, and she didn't have to accept. Kaz then tried to shoot McCoy, but was prevented from doing so.

Unknown to the rest of the personnel present, this was a diversion put on by the Klingons so as to allow Kali to slip out and plant a explosive capsule in the Enterprise's computer room. (TAS: "The Time Trap")

Retrieved from "https://memory-alpha.fandom.com/wiki/IKS_Klothos_personnel?oldid=2454870"
Community content is available under CC-BY-NC unless otherwise noted.