A list of personnel aboard the IKS Pagh in 2365.

These four officers served aboard the IKS Pagh in 2365 when Commander Riker came aboard as part of the Officer Exchange Program. They've passed Riker while he was brought to the captain and some of them served on the bridge. They were all present in the mess hall when Vekma told about her interest in Riker. (TNG: "A Matter Of Honor") 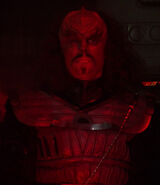 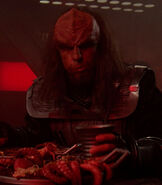 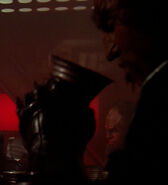 This tactics officer was a bridge officer aboard the IKS Pagh under Captain Kargan in 2365.

Before Commander William T. Riker joined the crew as part of the Officer Exchange Program, this officer had never seen a human before. When Riker first boarded the ship, the officer brought him to the bridge and later, along with Lieutenant Klag, struck up a conversation with Riker about the similarities between their species. When the subject turned to family, this officer told Riker that his mother was still alive but his father had been killed in battle at Tranome Sar. (TNG: "A Matter Of Honor")

This Klingon tactical officer was played by actor Peter Parros and the Star Trek Customizable Card Game give his name as Dukath.
Retrieved from "https://memory-alpha.fandom.com/wiki/IKS_Pagh_personnel?oldid=2459171"
Community content is available under CC-BY-NC unless otherwise noted.