A list of personnel aboard the IKS Rotarran in the 2370s.

These officers served aboard the IKS Rotarran in 2375 and attended the ceremony for Jadzia Dax and ensuring her place in Sto-vo-kor. They later served aboard the Rotarran during their mission to the Monac shipyard. (DS9: "Shadows and Symbols")

All Klingons were played by background and stunt performers who received no credit for their appearance. 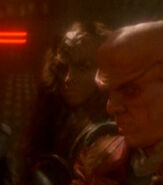 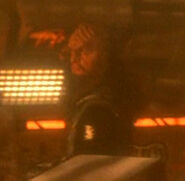 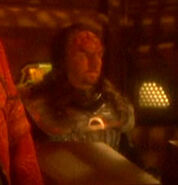 Played by Dennis Madalone
Add an image to this gallery

This female officer served on board the IKS Rotarran. She was present when Worf and Martok fought on the bridge in 2373. (DS9: "Soldiers of the Empire")

This officer was played by regular extra Susie Stillwell, who received no on-screen credit for her appearance.
Retrieved from "https://memory-alpha.fandom.com/wiki/IKS_Rotarran_personnel?oldid=2666806"
Community content is available under CC-BY-NC unless otherwise noted.