This captain commanded the Somraw in a raid against a race called the Xarantines, taking several cases of Xarantine ale as spoils of war.

After hiding in the atmosphere of a Q'tahL class planet to make repairs, the entire crew fell ill from a toxin in the ale and all but one lost consciousness. The crew was saved when Enterprise personnel developed an antidote to the toxin and moved the ship out of the atmosphere.

After recovering, the Somraw's captain attempted to attack Enterprise. However Captain Jonathan Archer pointed out that the Klingon ship was no match for Enterprise in its condition and urged the Klingon captain to take what honor he had left and go home. (ENT: "Sleeping Dogs")

This Klingon captain was played by veteran Star Trek actor Vaughn Armstrong. It was the third of three Klingon characters portrayed by him (the other two being Korris in TNG: "Heart of Glory" and Korath in VOY: "Endgame").
This character was described, in the final draft script of "Sleeping Dogs", as "rough-looking." The script went on to say, "
He is sweating and clutches an oddly-shaped bottle of ale, which he swigs from. The effect should be claustrophobic and frightening – like an intercepted transmission from hell. The Klingon Captain leans into the camera in a close-up [....] He clearly appears fevered and weak."
For the role of the Klingon captain, Vaughn Armstrong filled in for an unknown actor, who was unable either to complete his work or do the re-shoots. (Vaughn Armstrong ENT Season 1 DVD) Armstrong himself commented, "I guess they called me for this latest Klingon because they like the way I wear that makeup." [1]

These two bridge officers were unconscious on the bridge of the Somraw after consuming toxic Xarantine ale.

One was hunched over a standing console located in the aft section of the bridge; the second was slouched against a port-side console. (ENT: "Sleeping Dogs") 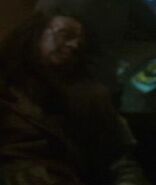 These two engineers were unconscious in the reactor pit of the Somraw after consuming toxic Xarantine ale.

One was found by Enterprise away team on the floor, while the second was found slumped over a work console where he lost consciousness while conducting repairs on the port fusion reactor. T'Pol and Malcolm Reed had to pick him up off the console and laid him on the floor in order to continue his repairs. (ENT: "Sleeping Dogs") 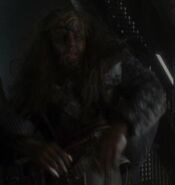 Second engineer
Played by Ken Gruz
Add an image to this gallery
Retrieved from "https://memory-alpha.fandom.com/wiki/IKS_Somraw_personnel?oldid=2407638"
Community content is available under CC-BY-NC unless otherwise noted.