This article is a stub. You can help Memory Alpha by fixing it.

This officer worked on the bridge. She was present when the ISS Charon arrived to meet the Shenzhou. (DIS: "The Wolf Inside") 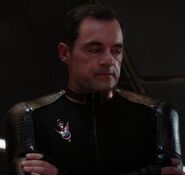 Two security officers were summoned to Michael Burnham's quarters to escort Ash Tyler out. However, Tyler attacked them, and a brawl broke out. (DIS: "The Wolf Inside")

This crewman operated the transporter. (DIS: "Despite Yourself", "The Wolf Inside")

Played by Demi Oliver.
Retrieved from "https://memory-alpha.fandom.com/wiki/ISS_Shenzhou_personnel?oldid=2504396"
Community content is available under CC-BY-NC unless otherwise noted.