Ian Andrew Troi II was the name given to a member of an intelligent spaceborne species in the 24th century.

The alien's natural form was a glowing white light that lived in space. It was able to penetrate a ship's hull in order to observe the inside. However, it could also take humanoid form through impregnating one and being born. When the alien did this, it had a very short gestation period and grew extremely rapidly. Even as a humanoid child, it retained its memory. The alien also emitted Eichner radiation naturally.

In 2365, it wished to experience Human existence after happening to pass by the USS Enterprise-D. It decided to impregnate Deanna Troi and became a half-Human, half-Betazoid male baby after a thirty-six hour term. Deanna named him after her father, Ian Andrew Troi. He grew from an infant to an eight-year old in one day. During this time, he enjoyed his tactile senses, even when burning his fingers. 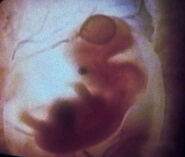 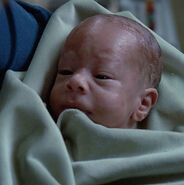 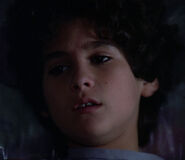 Retrieved from "https://memory-alpha.fandom.com/wiki/Ian_Troi?oldid=2470588"
Community content is available under CC-BY-NC unless otherwise noted.