In the 2020s on Earth, civilians used identification cards such as UHC cards and transit passes to avoid ending up in San Francisco's Sanctuary Districts. (DS9: "Past Tense, Part I")

In 23rd century Starfleet practice, identification cards were carried by Starfleet personnel. The ID card showed a person's name and service number, as well as their assignment and division.

In an alternate timeline, Starbase Yorktown featured Public transporters that required an ID scan to operate. (Star Trek Beyond)

Identification cards could be created aboard Starfleet starships, and they were sometimes necessary to gain access to certain areas, like a ship's shuttlebay. (TAS: "Mudd's Passion")

After having traveled back in time to 1986 from 2286, Pavel Chekov's ID card was seized by the United States Navy and read aloud by an FBI agent. The agent did not believe the information on the card, including the fact that Chekov represented Starfleet and the United Federation of Planets. (Star Trek IV: The Voyage Home)

On Enara Prime, Regressives wore this device around their neck. It could be checked to confirm their identity. (VOY: "Remember") 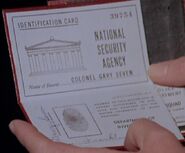