Imzadi is a Pocket TNG novel written by Peter David. Published by Pocket Books, it was first released in hardback in August 1992.

From the book jacket
Years before they served together on board the USS Enterprise-D, Commander William T. Riker and ship's counselor Deanna Troi had a tempestuous love affair on her home planet of Betazed. Now, their passions have cooled and they serve together as friends. Yet the memories of that time linger and Riker and Troi remain Imzadi – a powerful Betazoid term that describes the enduring bond they still share.

During delicate negotiations with an aggressive race called the Sindareen, Deanna Troi mysteriously falls ill… and dies. But her death is only the beginning of the adventure for Commander Riker – an adventure that will take him across time, pit him against one of his closest friends, and force him to choose between Starfleet's strictest rule and the one he calls Imzadi.

- Mr. Homn, on opening the door to Admiral Riker

"We all do it. Case in point: you're at a party and you run into a woman wearing a dress so ugly that it looks like a Klingon targ vomited on it. Do you say, "good evening, my dear, why are you wearing such a god-awful dress?" or "good evening, my dear, you look lovely this evening."
"Well… the second, I suppose, just to be sociable."
"Save it. On Betazed they know exactly what you're thinking."

- Mark Roper and Will Riker, on his assignment to Betazed

- William T. Riker and Captain Picard, on Riker's older self

"All is as it was."
"For crying out loud, if you knew that time had been tampered with in the first place, and you knew that the admiral's actions were correct… then why in hell didn't you tell us that?!"
"You did not ask."

- The Guardian of Forever and Commander Blair 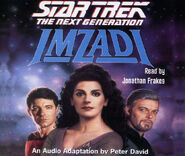 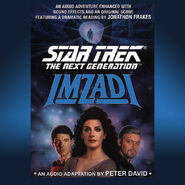 Mary Mac
head of the Federation team of scientists and historians studying the Guardian of Forever; as an Orion woman, she intentionally wears thick glasses and baggy clothes, to counteract the stereotype of her race and gender as "little more than animalistic sex kittens".
Dexter
Starfleet lieutenant, Admiral Riker's adjutant.
Eza/Mar Loc
Harry
Tennant

Retrieved from "https://memory-alpha.fandom.com/wiki/Imzadi_(novel)?oldid=2452134"
Community content is available under CC-BY-NC unless otherwise noted.