Sciences officer
Turla
Inez Edwards (born 26 July) is an actress who was a background performer in several episodes of Star Trek: The Next Generation but received no credit for her appearances. Her Starfleet uniform was sold off on the It's A Wrap! sale and auction on eBay. [1]

Edwards graduated from the Mexico High School in New York in 1978 and from the State University of New York College at Buffalo in 1983. Today, the in-group exercise, personal training, and youth fitness-certified Edwards is working as fitness and health coach under the slogan "Living Fit and Well" in Orlando, Florida. [2] 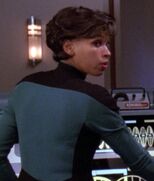 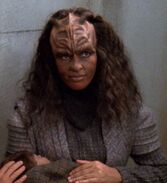