List of personnel who inhabited Internment Camp 371 penal colony, including prison personnel and their prisoners.

This Jem'Hadar guard was stationed at Internment Camp 371 in 2373, were Julian Bashir, General Martok, Worf, and Elim Garak were imprisoned. He oversaw the scan of Worf and Garak and informed his superior, Ikat'ika, that they were carrying no weapons and their identities have been confirmed. (DS9: "In Purgatory's Shadow")

These two guards fought Worf but were beaten by the latter. (DS9: "By Inferno's Light")

Both were played by unknown stunt performers.

This guard was stationed at Camp 371 in 2373, serving under an officer (see below). He discovered the crawlspace Garak was hiding in but could not see him. After a Breen prisoner killed the officer, the guard and Breen shot and vaporized each other. (DS9: "By Inferno's Light")

The Jem'Hadar Guard was played by Don Fischer.

This Jem'Hadar officer was stationed at Internment Camp 371 in 2373. He had been ordered to locate Elim Garak, who was to be executed. While looking for Garak, the officer and his men discovered the tool several prisoners were using to reach communications equipment. The officer was killed when a Breen prisoner stole his weapon and shot him. (DS9: "By Inferno's Light")

The Jem'Hadar officer was played by Barry Wiggins.
The Star Trek Customizable Card Game gives his name as Oken'alak, and states that he was the Fifth under Ikat'ika.

According to the script for "In Purgatory's Shadow", "[t]he Dominion isn't big on prisons, or on taking prisoners for that matter. This facility is for an elite group of P.O.W.s, people who the Dominion is especially curious about. And Worf and Garak certainly qualify."

These three aliens were among the prisoners held in Internment Camp 371 in 2373. (DS9: "By Inferno's Light")

An alien prisoner
Played by an unknown actor

An alien prisoner
Played by an unknown actor

This Breen was being held by the Dominion in Internment Camp 371. (DS9: "In Purgatory's Shadow")

He was vaporized by a second Jem'Hadar guard after the Breen had grabbed the first guard's weapons and killed him. The Breen also killed the second guard, having fired a shot at the same time. Had it not been for this Breen's sacrifice, Bashir, Garak, Worf, Martok and the female Romulan prisoner would never have escaped the camp. (DS9: "By Inferno's Light")

This Breen was played by regular extra and stand-in Cathy DeBuono, who received no credit for her appearance.

At least eight Cardassians (not including Garak) were held as prisoners at Interment Camp 371, and were present when Deyos announced that the Cardassian prisoners were being released upon Gul Dukat's announcement of the formation of a new alliance between the Dominion and the Cardassian Union. (DS9: "In Purgatory's Shadow", "By Inferno's Light")

According to the script, prior to their release, the Cardassians made up "about a third of the prison population".
The Star Trek Customizable Card Game gives the first prisoner's name as Emok, and the second prisoner's name as Rogesh. Both were shown in close-up shots but disappear in the wide shot of the assembled prisoners. 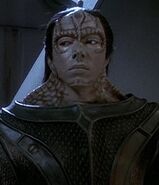 This Markalian was interned at the Dominion Internment Camp 371.

He spoke with Worf shortly after Worf and Garak arrived at the camp. (DS9: "In Purgatory's Shadow") He later appeared in the lineup with the other prisoners when it was announced that that Cardassian prisoners were to be released. (DS9: "By Inferno's Light")

This Markalian was portrayed by an unknown actor.

Four Romulans, two males and two females, were incarcerated at the Dominion's Internment Camp 371 in 2373.

All four appeared in the lineup with the other prisoners when it was announced that that Cardassian prisoners were to be released.

Two of the four, one female and male, were also cellmates who assisted in the planned escape from the camp. Althought the male Romulan was killed by the Jem'Hadar, however, she was able to escape along with Martok, Worf, Bashir and Elim Garak. (DS9: "In Purgatory's Shadow", "By Inferno's Light")

Although it was not mentioned in the dialogue, these characters were likely former Tal Shiar officers, judging by her uniform, and a survivor of the Battle of the Omarion Nebula. Ronald D. Moore commented: "Presumably, the Romulan woman was returned home." (AOL chat, 1998)
The Star Trek Customizable Card Game gives the first female's name as Kalenna. [1] The Badlands, Book Two calls her Varak, and her male cellmate was named Janok. 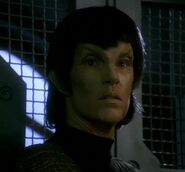 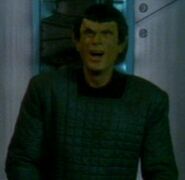 Played by an unknown actor
Add an image to this gallery
Retrieved from "https://memory-alpha.fandom.com/wiki/Internment_Camp_371_inhabitants?oldid=2678311"
Community content is available under CC-BY-NC unless otherwise noted.