An inverse tachyon pulse is a stream of tachyons capable of scanning beyond the subspace barrier.

In 2370, Captain Picard's consciousness began to shift between three different alternate timelines, in different time periods, due to the influence of Q. In all three time periods he ordered an inverse tachyon pulse initiated in the Devron system, in order to examine the interior of an anti-time eruption which had appeared in all of the time periods. The pulse was emitted from the vessel's main navigational deflector. Approximately fourteen hours were required to make the necessary modifications and scan the entire Devron system aboard the USS Pasteur.

Although the tachyon pulses proved successful in scanning the interior of the eruption, the use of a tomographic imaging scanner was required to fully penetrate it. Upon using the scanner, it was discovered that all three pulses were converging at the same point in space, causing a breakdown of the subspace barrier between time and anti-time, and causing the eruption. The timelines in which these events took place were later negated when the eruption was sealed into subspace. (TNG: "All Good Things...") 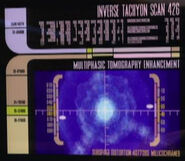