The Iron Cross was a military decoration awarded to soldiers for bravery in the 19th and 20th century German military. The decoration is most widely known as a Nazi military award which was issued between 1939 and 1945 during the Second World War. The decoration also was issued on the planet Ekos in the 23rd century.

Recreations of the Iron Cross were also seen in a holographic simulation created by the Hirogen on board USS Voyager. The Hirogen Commander Karr, dressed as an SS colonel, displayed the Iron Cross Second Class ribbon while hunting Voyager crewmembers in a recreation of World War II France.

Other members of the Hirogen, also participating in this "holodeck killing game", displayed both the Iron Cross First and Second Classes. (VOY: "The Killing Game") 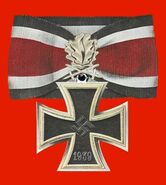 Knight's Cross of the Iron Cross

Iron Cross Second Class
Add an image to this gallery

The Iron Cross saw a resurgence on the planet Ekos in the 23rd century. The Ekosian society had been modeled after Nazi Germany by John Gill, with the Ekosian military and Nazi Party adopting the Iron Cross as an important decoration.

In his position as Führer of Ekos, John Gill wore a World War I vintage Iron Cross First Class as a medal on the front of his Nazi uniform. The Ekosian version of the Iron Cross Second Class was also worn as a full medal, much like the First Class version had been worn on Earth, but was awarded with grand ceremony and prestige whereas the Earth Iron Cross Second Class had been a somewhat common award held by countless solders and officers. (TOS: "Patterns of Force"; ENT: "Storm Front")

Gill's Iron Cross is a replica of the same decoration Adolf Hitler wore from his own First World War service. Hitler never actually wore a Nazi version of the Iron Cross, choosing instead to display his World War I decoration.

When Daras was awarded the Iron Cross Second Class for turning over her father as a traitor, the medal was presented by Deputy Führer Melakon in a "patriotic demonstratioin" which included a crowd of thousands and was witnessed by at least two senior members of the Ekosian SS. This was ironic since Daras was actually a member of the Ekosian resistance movement and had turned her father in as a ploy to gain further power within the Nazi Party while all the time working to destroy it from within. (TOS: "Patterns of Force")

Retrieved from "https://memory-alpha.fandom.com/wiki/Iron_Cross?oldid=2110352"
Community content is available under CC-BY-NC unless otherwise noted.