An isokinetic cannon was a type of starship-mounted directed energy cannon weapon developed and sold by the Entharan civilization of the Delta Quadrant.

In 2374, Captain Janeway of the USS Voyager entered into negotiations with Kovin, an Entharan weapons merchant, for the purchase of such a weapon. During a demonstration, the cannon was able to destroy a target buoy made of ten meter-thick solid monotanium, shielded by a chromoelectric force field. Kovin and Janeway agreed on a price of 125 isolinear processing chips and astrometric charts. Janeway offered Kovin five additional chips for supervising installation of the cannon. (VOY: "Retrospect")

The cannon was in the process of being installed, but it is not clear whether Voyager retained it since it was never seen again. Presumably, the events of "Retrospect" stalled the installation of the isokinetic cannon, and the project was scrapped.

Cannon fire about to hit a target buoy 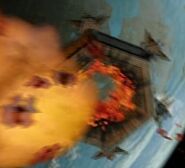 resulting damage
Add an image to this gallery

Retrieved from "https://memory-alpha.fandom.com/wiki/Isokinetic_cannon?oldid=2405403"
Community content is available under CC-BY-NC unless otherwise noted.