Ivor Bartels is an actor and stunt performer who was a regular background actor throughout the run of Star Trek: Deep Space Nine and also served as one of the stand-ins for Cirroc Lofton and Alexander Siddig. His appearance as a Klingon in the fifth season episode "Apocalypse Rising" is his only credited work.

For the episode "Defiant", Bartels filmed his scenes between Monday 3 October 1994 and Wednesday 5 October 1994 on Paramount Stage 4. 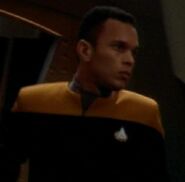 Retrieved from "https://memory-alpha.fandom.com/wiki/Ivor_Bartels?oldid=2418875"
Community content is available under CC-BY-NC unless otherwise noted.