Rita Tannenbaum; Multiple aliens
Ivy Borg (born 4 November 1956; age 65) is a former actress who worked as a regular background performer during the seven year run of Star Trek: Deep Space Nine. She appeared as the Starfleet officer Rita Tannenbaum as well as dozens of different Westmore aliens. Borg received no credit for her appearances. Her favorite episode is "Children of Time" in which she also portrayed Rita Tannenbaum, the wife of Colm Meaney's character in a different timeline. When she attempted to enter the Paramount lot for her first costume fitting for Deep Space Nine, the guard almost did not let her pass, because, as he put it: "Borg are not welcome on Deep Space 9". He did let her pass after a good laugh to himself.

Ivy Borg began working in Theatre on the Central Coast of California. After many musical stage productions including "The Unsinkable Molly Brown", "All Night Strut", and "Best Little Whorehouse in Texas", she finally landed the role of a lifetime as the mother in "Steel Magnolias".

She held the job of stand-in for many actresses, most notable a six-month job as stand-in for actress Robin Tunney on Arnold Schwarzenegger's fantasy thriller End of Days in 1999, which features fellow Star Trek performers Mark Margolis, Jack Shearer, and Marc Lawrence. Borg and the stunt doubles did almost all of the wide shots while Tunney only worked on the close ups. She worked on film sets as a stand-in, photo double, background performer, and day player.

Borg also worked for five years as background actress and stand-in on the television series Murder She Wrote and appeared as a café store patron in an episode of Frasier, starring Kelsey Grammer. Also on Frasier she worked as stand-in for actress Eva Marie Saint on the episode "Our Parents, Ourselves" in 1999, with fellow stand-in Carey Goldstein.

In 2001 she worked as extras casting assistant on the drama Cowboy Up. For several years now, Ivy Borg and her husband, Daniel Underdahl have worked as dog trainers for Swedish Valhunds on their Solborg Farm in California. 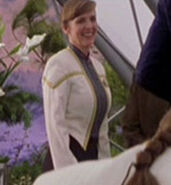 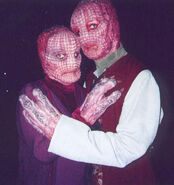 Pelian female
DS9: "His Way", "Image in the Sand"
(uncredited) 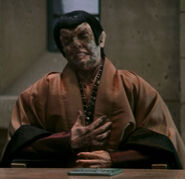