Kol
Overlooker/Doctor
Civilian ceremony attendee
Rolando "J.R." Quinonez is an artist and actor who was the regular stand-in, body double, and photo double for Robert Picardo on Star Trek: Voyager and for John Billingsley on Star Trek: Enterprise. His only credited appearance was in the episode "Renaissance Man" as Overlooker/Doctor. Quinonez also portrayed the original, non speaking version of Ferengi pilot Kol in the Star Trek: The Next Generation third season episode "The Price".

Picardo spoke in an interview about his work with Quinonez in "Life Line" during shooting for the special effects sequence, where he was Picardo's on-screen photo double. Quinonez played also a role in a Star Trek: Enterprise episode where he wore the costume from Tom Morga as Minnis in "Alliances". This information is from the costumer's tag and the costume was sold off on It's A Wrap! sale and auction on eBay. Other costumes which were sold off on the It's A Wrap! auction were Quinonez' photo double costumes from the episode "Virtuoso" [1] and another episode. [2] 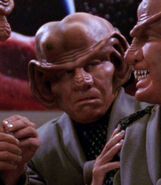 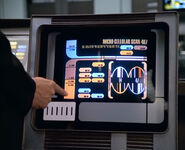 Civilian ceremony attendee
ENT: "These Are the Voyages..."
(uncredited)