The jahSepp were a species of sentient multidimensional fungus native to the mycelial network.

The natural form of the jahSepp within the mycelial network was as swarms of green sparks. They broke down all matter entering the mycelial network to make it useful in new ways, so as to progress the life cycle. The bark of the yeel tree was a deadly toxin to them. (DIS: "Saints of Imperfection")

They claimed to have been living harmoniously until their ecosystem began to be irreparably damaged by what they believed was Starfleet's utilization of the spore drive. Believing their entire species might die, one member of the species broke through the confines of the mycelial network at great personal risk, and managed to reach Sylvia Tilly. In her, it found the memory of May Ahearn, and started using it to manipulate her. (DIS: "An Obol for Charon", "Saints of Imperfection")

The jahSepp appeared unfamiliar with the concept of tears. (DIS: "Point of Light") 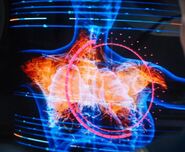 A jahSepp having taken parasitic hold of a human 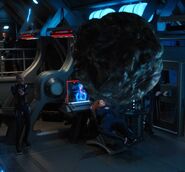 A jahSepp having been extracted from parasitic hold within a human
Add an image to this gallery
Retrieved from "https://memory-alpha.fandom.com/wiki/JahSepp?oldid=2529564"
Community content is available under CC-BY-NC unless otherwise noted.