Prime Minister Nayrok
Jaglom Shrek
Minister Hanok
Zefram Cochrane
Zefram Cochrane (mirror universe)
James Oliver Cromwell (born 27 January 1940; age 82) is a highly respected actor and a veteran Star Trek performer. While he has made several appearances on three of the Star Trek series, he is best known to Trek fans for his portrayal of Zefram Cochrane in Star Trek: First Contact. He would go on to make an uncredited cameo as Cochrane in the Star Trek: Enterprise first season episode "Broken Bow". Cromwell had earlier made guest appearances on Star Trek: The Next Generation and Star Trek: Deep Space Nine. He was interviewed on 25 June 2002 for the TNG Season 6 DVD special feature "Departmental Briefing Year Six" – "Make Up".

Born in Los Angeles, California and raised in New York, Cromwell studied engineering at the Carnegie Institute of Technology (now Carnegie Mellon University). Appropriately, he has played the part of a warp drive inventor (Star Trek) and a visionary cyberneticist (I, Robot, a film adaptation of Isaac Asimov's Robot Series). He began his acting career on television in 1974, but had some difficulty breaking into feature films because of his height. At a staggering 6'7" (200 cm), many filmmakers were afraid to give him any roles as he would tower over their stars. This soon changed, however.

Cromwell has become a highly recognizable figure outside of Star Trek. He earned an Academy Award nomination for his performance as Farmer Hoggett in the 1995 family film Babe, a role which he reprised in the 1998 sequel, Babe: Pig in the City. He also acquired praise for playing a crooked police captain in the highly acclaimed 1997 neo-noir thriller L.A. Confidential. Another cast member was one-time TNG guest actor Matt McCoy, whom Cromwell had worked with twice before in two television projects and would work with again on the short-lived TV series Citizen Baines in 2001. Other cast members in L.A. Confidential were Robert Clendenin, Steve Rankin, Symba Smith, Brenda Bakke, John Mahon and Colin Mitchell as well as stuntmen Steven Lambert, Jim Metzler, Don Pulford and Allan Graf. Cromwell would star as future disgraced United States Senator Charles Keating in the 1996 biopic The People vs. Larry Flynt costarring fellow TNG guest star Vincent Schiavelli.

One of his earliest films was 1978's The Cheap Detective, in which he co-starred with other future Trek alumni such as Louise Fletcher (Winn Adami), David Ogden Stiers (Timicin), and Jonathan Banks (Shel-la). Cromwell followed this with roles in such films as 1983's The Man with Two Brains, with David Warner, Jeffrey Combs, and Earl Boen, and 1984's Oh, God! You Devil, with Star Trek: Voyager regular Robert Picardo. The following year, Cromwell appeared in the film Explorers, which also featured Picardo as well as Dick Miller. In 1988, Cromwell would make an appearance in the pilot episode of TV's China Beach, starring not only Robert Picardo but Trek alumni Megan Gallagher, Jeff Kober, and Concetta Tomei as well.

Cromwell has been particularly busy following his Oscar-nominated role for Babe, starring in such major Hollywood films as Deep Impact (1998, with Denise Crosby, Tucker Smallwood, Kurtwood Smith, and Concetta Tomei), The General's Daughter (1999, with Clarence Williams III), the highly praised 1999 drama The Green Mile (with William Sadler and Paula Malcomson), The Sum of All Fears (with Bruce McGill as one of his Cabinet members) and the 2004 sci-fi/action epic I, Robot (co-starring Bruce Greenwood). However, Cromwell has also found time to participate in smaller films as well, such as 1998's Owd Bob, in which he co-starred with Colm Meaney (Miles O'Brien on TNG and DS9). He has worked on the occasional "art house" film as well: in 2006, he played Prince Philip, Duke of Edinburgh, in the acclaimed biographical drama The Queen.

In addition, Cromwell appeared as Captain George Stacy in the blockbuster film Spider-Man 3, opposite Kirsten Dunst. Another film he can be seen in is Becoming Jane, a biography of novelist Jane Austen, which was released in the UK in March 2007 and in the US in August 2007. Also in 2007 Cromwell voiced the character of Virgil in an animated adaptation of Dante's Inferno. John Fleck, another frequent Trek guest actor, voices a role in this film.

In 2008, Cromwell appeared as George Herbert Walker Bush in Oliver Stone's W, a biographical drama about former President George W. Bush. He currently has another project in the works in which he will play another former President of the United States: he is attached to portray Lyndon B. Johnson in the film Flying Into Love. In 2012 he was again nominated for Best Supporting Actor in The Artist (also featuring Malcolm McDowell).

As extensive as his film credits are, his television credits are even more so. In 1976, Cromwell co-starred with fellow Star Trek actors George Murdock, Andrew Robinson, William Windom, and Anthony Zerbe on the mini-series Once an Eagle. Ten years later, Cromwell was among the cast of the mini-series Dream West. Among the actors in this project were Cromwell's Star Trek: First Contact co-stars Jonathan Frakes and Alice Krige, as well as F. Murray Abraham, Michael Ensign, the aforementioned Matt McCoy, Noble Willingham, and Anthony Zerbe.

In 2003, Cromwell had a role in the highly acclaimed, multiple Emmy Award-winning mini-series Angels in America. That same year, he had guest-starring roles on the HBO series Six Feet Under, which led to his earning another Emmy nomination and becoming a regular cast member on the series from 2004 until it ended in 2005. Cromwell also received an Emmy nomination for a guest appearance on the TV series ER.

In 2004, he played Father Donald Callaghan in the miniseries Salem's Lot based on the novel of the same name by Stephen King. His ex-wife Julie Cobb played Bonnie Sawyer in the 1979 version.

Cromwell guest-starred in the sixth season of the FOX series 24. He played Phillip Bauer, the father of main character Jack Bauer. DS9 regular Alexander Siddig was also a member of the show's guest cast that season; other actors to appear in Cromwell's episodes include Michael Reilly Burke, Gregory Itzin, Natalia Nogulich and Maury Sterling. Cromwell also starred in the Masters of Science Fiction episode "Watchbird", with Sally Kellerman voicing the title role.

In 2018, he began guest-starring on the third season of the drama series Berlin Station, joining regulars Michelle Forbes, Leland Orser, and Ashley Judd. Also in 2018, he starred as Benjamin Lockwood in Jurassic World: Fallen Kingdom.

Cromwell is known for his work with animal rights causes and for fighting climate change. In 2017, Cromwell was sentenced to spend a week in the Orange County jail for blocking access to a nuclear power plant in Wawayanda, New York. [1] 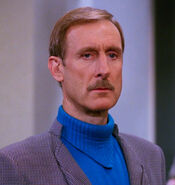 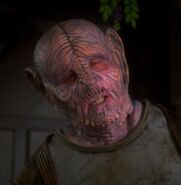 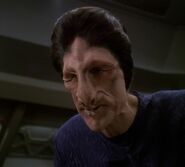 Additional projects in which Cromwell appeared with other Star Trek performers include: