James Frain (born 14 March 1968; age 54) is a British actor who portrayed Sarek in the first and second season of Star Trek: Discovery. He is married to director Marta Cunningham, who directed him in DIS: "Light and Shadows". (TRR: "Light and Shadows")

The costume he wore in "The Vulcan Hello" was sold off on the Prop Store Star Trek: Discovery online auction in September 2021. [1]

Frain came up in the British television and film circuit but was not exposed to American audiences until he was cast in the 1996 biopic Rasputin, costarring David Warner. Frain then made his American television debut in an episode of Tales From the Crypt called "Report from the Grave", starring John Kassir. He also appeared in series like 24, Invasion, The Tudors, True Blood, The Cape. In 2006, he guest-starred in an episode of The Closer, which starred Star Trek guest star Raymond Cruz.

He played the sadistic Ferdinand Chevalier on the Space/BBC America series Orphan Black, which included Star Trek alumni like Matt Frewer, Michelle Forbes, and Stephen McHattie. Frain's most recent television role was that of German-English billionaire Odin Reichenbach on the modern-day Sherlock Holmes adaptation, the CBS series Elementary created by Robert Doherty for that show's seventh and final season. 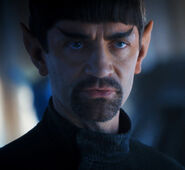 Sarek (mirror)
DIS: "The Wolf Inside"