Korby used the android duplicator to make a very close copy of Captain Kirk, and though initially intended only to impress Kirk and gain his cooperation in exploiting a new planet, the duplicate served to impersonate him once Korby realized his cooperation was not forthcoming.

During the copying of his memories into the android, Kirk had held a marked antagonism towards his first officer in the forefront of his consciousness, repeating the phrase "Mind your own business Mr. Spock! I'm sick of your half-breed interference, do you hear?" Aboard the Enterprise on a mission for Korby, the duplicate used Kirk's phrase in order to avoid Spock's observation. As it was, however, completely out of character, the phrase alerted Spock to the fact that his captain was in trouble.

Back under the surface of Exo III, the android duplicate was destroyed by Andrea when it rebuffed her attempt at seduction, terming her wish to kiss "illogical". She was armed with a phaser gun, since Korby had just ordered her to protect the cavern base from Spock's landing party. (TOS: "What Are Little Girls Made Of?") 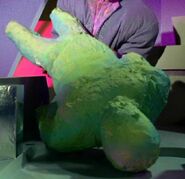 Destruction of Kirk android
The Kirk android was played by William Shatner for frontal shots, and by Eddie Paskey from the back when appearing at the same time as the real Kirk.
The bust Ruk placed in the "android duplicator" was initially described in the final draft of the script as "a green-brown shape (about the breadth and height of a human body, but without appendages), a huge plasticized, roughly molded shape." Then during the duplication process described as "the formless brown-green mold dissolving into stone color and a humanish (mannequin) form with definite appendages," before finally, "the mannequin-like skin-tone figure dissolving into a human figure (actor-double) like Kirk."
Deutsch
Community content is available under CC-BY-NC unless otherwise noted.
Advertisement