Janos Prohaska (Hungarian: János Prohászka) (10 October 1919 – 13 March 1974; age 54) was a Hungarian stunt man, actor, and animal imitator. Several of the Star Trek: The Original Series monsters and aliens were performed by Prohaska. Prohaska was brought into the first pilot, "The Cage", by Assistant Director Robert Justman, who already had worked with him on the classic original ABC science fiction series The Outer Limits. Justman was impressed by Prohaska's ability to imbue the monster costumes he wore with a "magical sense" of animation. (Star Trek: The Magazine Volume 3, Issue 9, p. 71)

Originally, his scene with the humanoid bird for "The Cage" was to have been far more extended, but Prohaska's performance proved to be too weird for Director Robert Butler, who recalled. "I remember there was some chicken – some killer fowl – being locked in some cell somewhere, and I'm talking to this stuntman – it's crazy, me talking to this Janos Prohaska, [who was] Hungarian or something...[saying], "Janos, okay that's good, baby, now try this." And there's this big chicken – this killer chicken – or some equivalent. I mean, it was nuts." (These Are the Voyages: TOS Season One, 1st ed, p. 60) Needless to say, the extended scenes were not utilized in the pilot as presented.

Despite having already performed in "The Cage", Prohaska, described by Justman as a "sweet man, mild, modest and unassuming", still had to make case-by-case pitches for additional performances in the series – as the need for outlandish creatures were few and far between, for any motion picture production for that matter – , which he did in his own peculiar fashion by becoming the creature, once inside his costume, and showing "a much darker side of his nature", as Justman recalled, " Janos came by our office, on spec [note: industry idiom for an unsolicited pitch without any guarantees], and donned his chimp outfit. He scuttled around the room, suddenly sprang up onto a desk, studied his surroundings and leaped to the top of a filing cabinet. He squatted, chattering and scratching himself like Cheetah, Tarzan's pet ape. His performance was impressive. But when one of the secretaries walked in, Janos leaped onto her and, in hominid fashion, attempted to take uncalled-for sexual liberties. After we pried him off her, which wasn't easy, he apologized for "the chimp's" actions."

Prohaska, aside from wearing costumes created by others – the ones he wore in "The Cage" were Wah Chang creations –, also designed and created his own, again impressing the producers when he made a pitch for one of these. Justman continued,

"We made a "spec" deal with Janos. If he came up with a really great creature for a script Gene Coon was writing, we'd rent it and hire him to play the part. Janos was back within a week's time with his custom-designed creature. It was a large pancake-shaped glob of gook with a thickened raised center and fringe around its circumference. It sure didn't look like much. As Janos took the glob out of sight to put it on, Gene Coon raised an objection "Bob, why are wasting time with this?" Suddenly, the blob skittered around the corner, making straight for us. Then it stopped, curiously, backed away, and rotated in place. The blob gathered itself up, quivered, made a whimsical up-and-down movement, grunted, and skittered away again – leaving behind a large, round white "egg". Coon was dumbfounded. He watched the creature giving birth. And when the creature suddenly turned and scurried back to nuzzle its "child", Gene was sold. "Great!" he exclaimed, "It's perfect! Just what we need." Then he excitedly hastened back to his office to finish writing the script. Gene Coon's "The Devil in the Dark" became one of Star Trek's most famous episodes. And Janos Prohaska played his own creation, one of Star Trek's most famous creatures, the highly imaginative and custom-designed mother Horta." (Inside Star Trek: The Real Story, pp. 214-215)

What neither Justman nor Coon had realized at the time however, was that Prohaska had actually already created the creature previously for The Outer Limits, first appearing in the final episode, and that he had only slightly modified the rubber costume with veins and the "fringe" for its Star Trek appearance. (Star Trek: The Magazine Volume 3, Issue 9, p. 73) Titled "The Probe" (with Peter Mark Richman), the Outer Limits episode's storyline was about survivors of a plane crash in the Pacific waking up to find themselves (and their life raft) on the floor of an alien spacecraft sent to collect terrestrial lifeforms. In this episode, broadcast in January 1965, the future Mrs. Horta was performing yeoman service as a giant cold germ threatening the hapless Earth people. (The World of Star Trek, 3rd ed., p. 74) Similarly, the Mugato costume (without its spikes and horn) was also used by Prohaska in the Voyage to the Bottom of the Sea episode "Fatal Cargo" and the Here's Lucy episode "Lucy's Safari".

Often nicknamed "The Great Janos", he specialized in performing different out-of-this-world creatures and exotic animals, especially apes. He was employed in numerous television series and feature films during the 1960s and early 1970s. Among others, he worked for the aforementioned The Outer Limits; in particular, as already mentioned, the monster from "The Probe", the last Outer Limits episode, whose movements were similar to that of the Horta. He also appeared in series such as The Munsters, Lost in Space, Bewitched, I Dream of Jeannie, Gilligan's Island, Voyage to the Bottom of the Sea, The Lucy Show, Here's Lucy (both of which starred Desilu co-founder Lucille Ball) and Land of the Giants; and movies such as Escape from the Planet of the Apes (1971, with Ricardo Montalban, William Windom, Jason Evers, and James B. Sikking). His most famous role was the "Cookie Bear", which he played on The Andy Williams Show between 1969 and 1971 – although it was a talking role, Prohaska was dubbed by one of the show's writers, Ray Reese.

Prohaska's thick Hungarian accent prevented him from getting speaking roles. A plane crash claimed his life in 1974, while working on the ABC series Up from the Ape (aka Primal Man), which featured Anthony Zerbe and Paula Crist. His only son, actor Robert, perished alongside his father. [1] 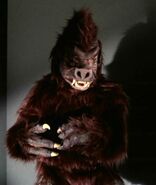 Mother Horta
TOS: "The Devil in the Dark"
(uncredited) 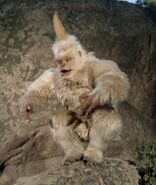