Jeff Allin is an actor who guest starred in two episodes of Star Trek: The Next Generation and Star Trek: Voyager. He also appeared in the 1996 video game Star Trek: Borg. Allin filmed his scenes for "Imaginary Friend" between Wednesday 26 February 1992 and Friday 28 February 1992 and on Wednesday 4 March 1992 and Thursday 5 March 1992 on Paramount Stage 8, 9, and 16. His costume from his Voyager appearance was later sold off on the It's A Wrap! sale and auction on eBay. [1]

Allin had previously worked with Kate Mulgrew in the 1985 action film Remo Williams: The Adventure Begins prior to his appearance on Voyager. Allin also worked with future Trek actors Armin Shimerman, James Cromwell, and Matt McCoy in the 1990 Television Film Miracle Landing, a dramatization of the ill-fated Aloha Airlines flight 243. 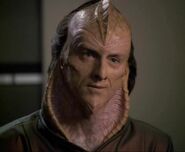 Gedrin
VOY: "Dragon's Teeth"
Add an image to this gallery

Retrieved from "https://memory-alpha.fandom.com/wiki/Jeff_Allin?oldid=2525526"
Community content is available under CC-BY-NC unless otherwise noted.