Jeff Joseph Wolfe is a stuntman, stunt actor, and stunt coordinator who performed stunts in several episodes of Star Trek: Enterprise. He received no credit for his appearances.

Wolfe is a martial arts expert, specialized in stunt fights and sword work and holds black belts in Jiu Jitsu and Tae Kwon Do. He has doubled for stars such as Thomas Ian Griffith, Pierce Brosnan, and Steven Brand. Currently, Wolfe is serving as Vice President of the Stuntmen's Association of Motion Pictures. [1]

Among his more recent projects is the stunt coordination for the television series Numb3ers. 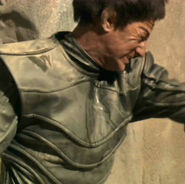 Retrieved from "https://memory-alpha.fandom.com/wiki/Jeff_Wolfe?oldid=2525417"
Community content is available under CC-BY-NC unless otherwise noted.