The Jem'Hadar or Dominion battleship was a type of warship introduced in the Alpha Quadrant in 2374, shortly after the outbreak of the Dominion War.

On stardate 51825, the Federation starship USS Valiant conducted a mission to collect technical data on a new battleship operating in their sector.

After spending three hours collecting data on the vessel, it was determined that it was a direct threat to every Federation outpost and colony within fifty light years and that it had to be destroyed.

Believing they found a weakness in the design of the ship, they engaged the ship and were subsequently destroyed with ease by the battleship leaving only Jake Sisko, Nog, and a Red Squad cadet, Dorian Collins left to escape. (DS9: "Valiant")

A Jem'Hadar battleship was used in the assault of at least one of the eighteen Cardassian Rebellion bases in late 2375. (DS9: "The Dogs of War")

Several of these ships participated in the Battle of Cardassia. Afterward, they and the other Dominion forces retreated to the orbit of Cardassia Prime to join the defense of that planet. (DS9: "What You Leave Behind")

Initial observations of the vessel, conducted by the Valiant using sensor probes, indicated that the battleship was twice the size of a Galaxy-class starship and three times as powerful.

The crew of the USS Valiant incorrectly determined that the primary support braces for the antimatter storage system of the battleship were constructed from viterium, prone to destabilization when exposed to delta radiation.

The Valiant crew attempted to exploit this possible design flaw using modified torpedoes, but discovered that the ship was not as susceptible as they thought; despite causing a massive fireball in the explosion, destroying the braces caused little to no meaningful damage to the ship. (DS9: "Valiant")

While appearing onscreen as torpedoes, the script described the armament of the battleship as being phasers.

According to Jake Sisko's statement, which Nog confirmed as "accurate" assuming he was referring to length rather than mass, the battleship is 1,284 meters long if taken literally. This is supported by the close-range engagements in "Valiant", which establish a size several times larger than that of the Defiant-class. The same approximate scale is maintained for the battleships during the Battle of Cardassia. However, in the final shot of the Dominion fleet around Cardassia, the battleship was scaled several times larger than previous. Although this was presumably done to enhance the ominous effect of the fleet. 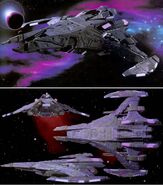 The script for the episode "Valiant" called for shots of the Valiant making strafing runs on the Jem'Hadar battleship, taking it extremely close to the surface of the enemy vessel. "If possible we would have used the physical model for both the cruiser and the Battleship, with the scale of the model being the only difference.(...)Since the story called for close up attacks, the camera would have to be flying an inch or so off of the physical model. This was pretty much impossible with the motion control camera/rig and more importantly, the physical model was never constructed to tolerate that kind of close up scrutiny. It just did not have the detail to hold up," David Stipes remembers on his blog. [1](X) The only other available model at the time, VisionArt's CGI model, was not up to the task either for the same reasons. It was therefore decided to have a new model built in CGI, the second new studio model for DS9 with no physical counterpart. The Dominion battleship was designed by John Eaves, [2] [3] [4] along the same lineage lines of the Jem'Hadar battle cruiser, its close resemblance later causing the two models to be sometimes confused with each other. [5](X) After the design got its final approval in March 1998, the task of building the CG model was contracted out to Digital Muse. The extra added detail, texture and surfacing needed for this episode, would work to its disadvantage in later appearances, betraying the model as being CG when used in medium to long range shots.