She reprised the role in Star Trek: Picard, first as a recurring guest star in the first season, then promoted to the main cast for the second season and the upcoming third season.

Far from being a fan of science fiction, Ryan nearly turned down the role of Seven of Nine. She reportedly had to be convinced by the producers that the role would not simply be "an intergalactic Barbie". [1] [2] According to Ryan, the Borg suit she had to wear as Seven of Nine was initially so tight that she blacked out four times until the problem was fixed. [3] [4](X)

According to some sources, she would have appeared as Seven of Nine in Star Trek Nemesis, were it not for a scheduling conflict with her role in the television series Boston Public. The cameo went to her Voyager castmate Kate Mulgrew instead. [5] Ryan also expressed interest in appearing as an ancestor of Seven on Voyager's successor series, Star Trek: Enterprise, but only if her schedule allowed it and if it was written by Brannon Braga, her boyfriend at the time. [6](X) [7](X)

Several costumes and costume components worn by Ryan throughout the run of Voyager were sold off on the It's A Wrap! sale and auction on eBay, including a dark blue shirt. [8]

In 2014, Ryan reprised the role of Seven of Nine for the Star Trek Online expansion Delta Rising, set 32 years after Voyager. Two years later, she recorded a video of her play-testing the virtual reality game Star Trek: Bridge Crew with LeVar Burton and Karl Urban.

Ryan was born Jeri Lynn Zimmerman in Munich, West Germany. Her father, for whom she was named, was in the US Army, so for the first few years of her life Ryan grew up on numerous military bases in West Germany and the US. Her family finally settled down in Paducah, Kentucky, when she was 11.

She graduated from Lone Oak High School in 1986, then went on to Northwestern University in Chicago, Illinois, where she obtained a degree in theater. While at Northwestern, Ryan entered and won several beauty pageants as a way to help pay for her tuition. In 1990 she won fourth place in the Miss America Pageant where she competed as Miss Illinois.

Following her divorce, she became romantically involved with Voyager executive producer Brannon Braga. The two lived together with Ryan's son, but their relationship has since ended. [9](X) On February 8, 2005, Ryan and her current husband, French chef Christophe Emé, opened a restaurant called "Ortolan", which they ran until December 31, 2010. Ryan announced that she and Emé were engaged to be married in July 2006, and they married on June 16, 2007. [10] [11] [12] The couple's first child, a daughter Gisele, was born on March 2, 2008. [13] [14](X)

Before joining the cast of Star Trek: Voyager in 1997, Ryan was a cast member of another science fiction series, Dark Skies (with Winrich Kolbe.). However, this series, which only lasted one season, ended soon after she came aboard.

After Voyager came to an end in 2001, Ryan joined the cast of the FOX drama Boston Public, created by David E. Kelley. She played high school teacher Ronnie Cooke on this series, which ended in 2004. Afterward, Ryan had a recurring role on the hit series The O.C., beginning with the episode "The Aftermath" which aired on 8 September 2005.

Ryan starred as attorney Jessica Devlin on the CBS series Shark. This series began airing on 21 September 2006 and aired its final episode on 20 May 2008. Ryan took maternity leave from the series late in the second season and did not appear in the show's last four episodes, although her name still appeared in the credits. CBS canceled the series before Ryan could return.

Ryan appeared as Lt. Sonya Blade in the web trailer Mortal Kombat: Rebirth at the personal invitation of its director and personal friend, Kevin Tanchareon. This trailer, which aired June 8, 2010, later evolved into the 2011 web mini-series, Mortal Kombat: Legacy, in which she returned as Sonya.

Ryan's latest role is that of the title character's aunt on the reboot of MacGyver, beginning in the late fourth season in 2020. Her debut, "Father+Son+Father+Matriarch", paired Ryan with TV guest and film lead actor Peter Weller.

Ryan played the role of Sherri in two episodes of the CBS sitcom Two and a Half Men, one in 2004 and another in 2005 and also appeared in 2011. In 2009, Ryan made two appearances as defense attorney Patrice Larue on the NBC drama Law & Order: Special Victims Unit and a third one in 2010.

She portrayed the con artist Tara Cole in the series Leverage in seasons 2 and 4. Former TNG cast member Jonathan Frakes is a frequent director on this series, and he has directed at least one episode, "The Bottle Job" with Ryan. In 2014, she starred as Constance Sutton in the SyFy series Helix opposite William O. Campbell.

Ryan was also the star of two independent feature films: Men Cry Bullets in 1997 and The Last Man in 2000. She also had a small but memorable role as a reporter-turned-vampire in the film Wes Craven Presents: Dracula 2000. This film also starred Christopher Plummer from Star Trek VI: The Undiscovered Country. In 2003, Ryan made an appearance in the romantic comedy Down with Love, co-starring Warren Munson, Michael Ensign, and Jude Ciccolella. Zachary Quinto also appeared as an extra in this film.

In October 2010 Ryan starred in the TV movie Secrets in the Walls on the Lifetime Movie Network, followed by the television thriller Dead Lines also in 2010.

Ryan made guest appearances on such TV shows as Who's the Boss?, Matlock, Murder, She Wrote (in an episode with Lee Meriwether and Eric Pierpoint), and Melrose Place. She also appeared in a 1991 episode of The Flash along with Star Trek: The Next Generation actress Denise Crosby, TNG and Deep Space Nine guest actor Dick Miller, and Voyager guest actor Ian Abercrombie.

In 2006, Ryan appeared in the two-hour second season finale of David E. Kelley's series Boston Legal, co-starring with William Shatner and Rene Auberjonois. Robert Foxworth also guest-starred in the episode. In March 2010, she appeared on the popular comedy-detective series, Psych. She played the romantic interest to the character played by Corbin Bernsen, who previously appeared as Q2 in the Star Trek: The Next Generation episode "Deja Q". [16]

In 2011, Ryan had guest parts in the Law & Order: Criminal Intent episode "Boots on the Ground", co-written by Paul S. Eckstein, in which she played Naomi Halloran, and in the third season of the mystery series Warehouse 13 on which she worked with Saul Rubinek.

On May 9, 2006, she was seen in the audience of FOX TV's American Idol. It was also on this day that the promo for her episode of Boston Legal first aired on ABC.

On 22 January 2010, Ryan participated in the fund-raising program Hope for Haiti Now: A Global Benefit for Earthquake Relief. She was among the celebrities who operated the phones for the benefit, along with Star Trek actors Chris Pine, Zoë Saldana, and Tyler Perry, Star Trek VI: The Undiscovered Country actor Christian Slater, and Robin Williams. [17] 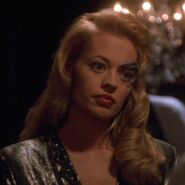 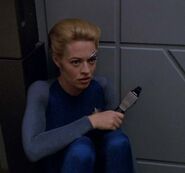 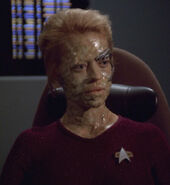 Seven of Nine (hologram)
VOY: "Someone to Watch Over Me"

Seven of Nine (illusion)
VOY: "Barge of the Dead"

The Doctor (in the body of Seven of Nine)
VOY: "Body and Soul" 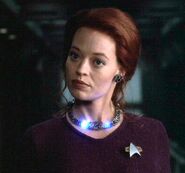 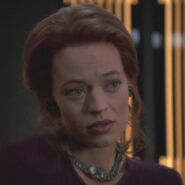 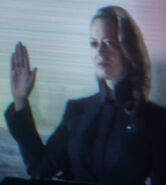