O'Connell commented on his series: "I do a voice on an animated Star Trek. Super funny, called Star Trek: Lower Decks. It's going to be really funny, and the guys and girls who write it are very dialed-in to the Star Trek canon except that this is the animated, crazier version of everything Star Trek. I can't believe the knowledge that these guys and girls have that write Lower Decks. It's crazy and it's funny when I'm in that position because when they start talking about things that happened in Star Trek: Deep Space Nine, I have no idea what they are talking about. And I'm in a position in which I am afraid to ask, because I don't want to lose my job or have people think that I'm not as dedicated as they are to the canon. But these people are true experts and they're animating it. I think that people are going to really dig it". [2]

He is married to Rebecca Romijn, who plays Una Chin-Riley on Star Trek: Discovery, Star Trek: Short Treks and Star Trek: Strange New Worlds. He co-starred with Wil Wheaton in the 1986 Stephen King film Stand By Me. Between 1995 and 1999, O'Connell starred as Quinn Mallory in the science fiction series Sliders, created by Tracy Tormé, and co-starring John Rhys-Davies. Between 2001 and 2007, he co-starred in the crime series Crossing Jordan, with Miguel Ferrer. Roxann Dawson served as director and producer on this show. 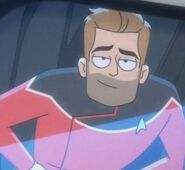