She rose to fame at age 19 as a contestant in the talent show Australia's Next Top Model which was followed by a successful career in modeling.

Her part in Strange New Worlds is her first role outside her native country and in Hollywood. 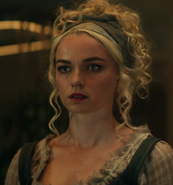