Angosian soldier
Crewman Garvey
Joe Baumann (born 13 August 1959; age 62) is an actor who appeared as a regular background actor throughout the third season til the seventh season of Star Trek: The Next Generation. As a background performer he received no credit for his appearances and was identified by the call sheet for the episode "Bloodlines".

According to the call sheet of Tuesday 8 January 1991 he filmed a scene in engineering along with Eben Ham, Craig Hurley, and stunt coordinator Dennis Madalone for the fourth season episode "Night Terrors". This scene was cut from the final episode. Bauman was also scheduled to appear in scenes in Ten Forward for the episode "The Nth Degree" but was replaced by another background performer. He was also on set for the fifth season episodes "Violations" and "Ethics" as relief tactical officer on the bridge but was not part of the final episodes. Bauman was scheduled to appear as security in Ten Forward scenes in the episode "Cost of Living" but was not part of the final episode.

Baumann moved to California in 1982. He married Eugenie Anne Gifford on 5 July 2003 in Brentwood, Los Angeles. The couple has one daughter, actress and singer Ryan Baumann. Baumann and his daughter wrote the lyrics for her first song, produced in 2020. [1] [2] Today, Baumann has been working as realtor/real estate agent. 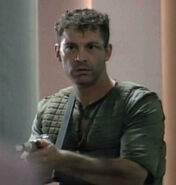 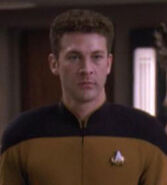