Joey Davis is an actress who appeared as a recurring background performer in several episodes of Star Trek: The Next Generation. She received no credit for her appearances and was identified by the call sheets for the fifth season episodes "Unification I" and "Unification II". For "Unification I" she also worked as additional stand-in for guest actress Joanna Miles. 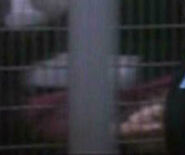