Voyager officer, Ferengi officer
Joey Sakata (born 17 May 1966; age 54) is an actor who worked as regular background performer and stand-in on Star Trek: Voyager. He received no credit for his appearances except for his final appearance in the episode "Endgame" where he is listed as "Engineering N.D." in the end credits.

He appeared in several episodes as a Voyager officer in the operations and sciences division and a tunic worn by him was once sold off on the It's A Wrap! sale and auction on eBay. [1] 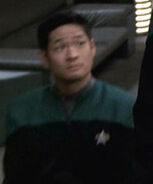 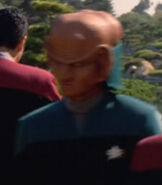 Retrieved from "https://memory-alpha.fandom.com/wiki/Joey_Sakata?oldid=2700968"
Community content is available under CC-BY-NC unless otherwise noted.