Born in Media, Pennsylvania and raised in Weston, Connecticut, Billingsley attended Bennington College in Vermont, where he studied theater. He currently resides in Los Angeles, California with his wife, actress Bonita Friedericy, who appeared in the Enterprise episode "Regeneration".

Billingsley broke into films in 1988, making his debut with a supporting role in the thriller Seven Hours to Judgment, in which Tiny Ron also starred. He followed this with a small role in 1990's I Love You to Death, featuring Jack Kehler. He also made an appearance in a customer service video for Nintendo in 1991. [1]

By the late 1990s, Billingsley was making frequent appearances both in films and on television. His film credits during this period included Born to Be Wild (1995, with Gregory Itzin, Alan Ruck, Titus Welliver, and Bruce Wright), Eat Your Heart Out (1997), and Kate's Addiction (1999). He made guest appearances on such television programs as NYPD Blue (with Jude Ciccolella, Gordon Clapp, Daniel Dae Kim, and Sharon Lawrence), The Practice (with Frank Novak and Chris Sarandon), L.A. Doctors (with Tracy Middendorf), The Pretender (with Natalia Nogulich, Harve Presnell, and Steve Vinovich), and The X-Files (with Michael McKean and Charles Rocket). He also appeared in the acclaimed 1999 made-for-TV movie Tuesdays with Morrie.

In 2000, Billingsley appeared in the film Breathing Hard, which also featured Star Trek: Deep Space Nine regular Armin Shimerman (Quark) and his wife, Kitty Swink. That same year, Billingsley became a regular on the science fiction series The Others. Among his co-stars in this series was Bill Cobbs, with whom Billingsley later co-starred in the Enterprise episode "Daedalus". The series, however, only lasted one season before being canceled. Nonetheless, Billingsley continued to make appearances on television, including a guest-starring role opposite his future Enterprise co-star Jolene Blalock (T'Pol) on UPN's G vs E. The two reunited for Enterprise (another UPN series) the following year.

During this time, Billingsley co-starred with future Enterprise guest actress Joanna Cassidy in a two-part episode of Diagnosis Murder and later in an episode of Six Feet Under (which also guest-starred Robert Foxworth and Wendy Schaal). He also appeared with Patti Yasutake in an episode of Judging Amy, with Christopher McDonald, Julie Warner, Salli Elise Richardson, and Robert Curtis Brown in an episode of Family Law, and Star Trek: The Next Generation star Jonathan Frakes in an episode of The Lot. Billingsley and Frakes went on to co-star together in a Trek-oriented episode of Roswell (with the two actors playing themselves while holding a casting call for a fictional episode of Enterprise) in 2001 and in the Enterprise series finale, "These Are the Voyages...", in 2005.

In 2001, Billingsley co-starred with Michael Dorn in independent drama Lessons for an Assassin. He also appeared in the films Crocodile Dundee in Los Angeles (with Jonathan Banks and Matt Winston) and The Glass House (with Erick Avari) and the TV movie Just Ask My Children, co-starring Virginia Madsen, Casey Biggs, and Jack Shearer. Husband and wife acting team Armin Shimerman and Kitty Swink also had roles in this latter movie, their second with Billingsley. Also in 2001, Billingsley was cast in his most famous role yet: the strange, optimistic Dr. Phlox on the new Star Trek series, Enterprise.

Billingsley's limited work during Enterprise's four-year run allowed him time to continue to make additional film and TV appearances. He appeared in an episode of Stargate SG-1, in which he played an obsessed Trekkie scientist who "worships at the altar of Roddenberry". He also appeared in two episodes of NYPD Blue (again working with Gordon Clapp) and an episode of Angel. Perhaps his most notable TV guest role during this time, however, was a victimized serial killer in two episodes of Cold Case (appearing with Jamie McShane in the first).

In addition, Billingsley appeared with Ashley Judd in the 2002 Paramount thriller High Crimes, which also featured Bruce Davison. The following year, High Crimes director Carl Franklin cast Billingsley in a principal role in the 2003 thriller Out of Time, opposite Denzel Washington. Other films Billingsley appeared in during this time include the 2002 drama White Oleander (with Biff Yeager), the 2004 comedy A Cinderella Story and The 12 Dogs of Christmas (2005, with Richard Riehle).

Since the cancellation of Enterprise in 2005, Billingsley has kept busy performing on the stage, although he has had time to do some occasional film and TV work.

Billingsley appeared in a film called Ripple Effect, co-starring Denise Crosby and Virginia Madsen, which was released in 2007. He also had a role in Jerome Bixby's The Man from Earth, a science fiction movie co-starring Richard Riehle and Tony Todd. The latter project involved a 14,000 year old immortal man who has lived on Earth under a variety of identities (similar to Flint from The Original Series).

Later, Billingsley appeared in the 2008 independent drama entitled Finding Red Cloud, along with Jack Kehler. Billingsley also co-starred with Bob Gunton in an independent mystery-thriller called The Least of These. He was later seen as a professor in two feature films released in 2009. The first was the comedy The Pool Boys, which co-starred TOS regular George Takei. The second was the apocalyptic disaster film 2012, which also featured Enterprise and Deep Space Nine guest actor Stephen McHattieand was having John Billingsley as a scientist taking part of the "survival of the humankind" struggle.

In 2006, Billingsley had the recurring role of Terrence Steadman in the hit FOX TV series Prison Break. However, he had to leave that show (and his role re-cast) when he was cast as a regular on ABC's new series The Nine. In this show, Billingsley played Egan Foote, one of nine people who become linked following a bank robbery and a subsequent 52-hour standoff in which he and the others are hostages. Actor Zach Grenier, who once co-starred with Billingsley on Enterprise, had a recurring role on this series. The series premiered on Wednesday, 4 October, at 10 pm EST, but was immediately removed from ABC's schedule on 28 November, after only thirteen episodes were produced, only seven of which had been aired. The remaining six episodes aired in August 2007.

In 2007, Billingsley played the recurring role of Michael Latham on the hit FOX series 24 for the show's seventh season, which premiered in January 2009. Enterprise guest star Annie Wersching, DS9 guest star Jeffrey Nordling, and TNG guest star Bob Gunton joined the series as regulars that season. Billingsley's 24 character was unceremoniously killed off via explosives, just as Alexander Siddig's character was killed in the show's previous season.

Billingsley currently plays the recurring role of coroner and funeral home director Mike Spencer on the acclaimed HBO series True Blood. He began appearing on the show in 2008, and has been seen in thirteen episodes as of September 2009. During his time on this show, he has worked with fellow Star Trek alumni Michael Bofshever, Kristin Bauer, Michelle Forbes, Lindsey Haun, Randy Oglesby, James Parks, Stephen Root, William Schallert, and Scott Alan Smith.

From 2015 to 2016, he had a recurring role on the television series Turn: Washington's Spies. The series also featured Aldis Hodge and Stephen Root.

Billingsley starred in the 2006 TV movie Dead & Deader, in which Armin Shimerman also appeared. In a guest role, he was in an episode of The Closer that starred Trek guest star Raymond Cruz. His other recent television credits include a role on an episode of Nip/Tuck with Bob Gunton and an appearance as blind photographer Jackson Scott in a May 2007 episode of NCIS, which featured Susanna Thompson and Scottie Thompson's recurring characters as well. He was also seen in the CSI episode "The Case of the Cross-Dressing Carp" (opposite Wallace Langham) and the third episode of NBC's series Journeyman, both of which aired October 2007. He was next seen in a two-part episode of the hit series Grey's Anatomy, the first part of which was directed by Michael Grossman.

Billingsley was seen in a 2008 episode of Eli Stone in which he and Molly Hagan play husband and wife. He then guest-starred in the final episode of Women's Murder Club; his former Enterprise co-star Linda Park was a regular on this series, but she did not appear in the episode. Billingsley was next seen, along with his wife, in an episode of the horror anthology series Fear Itself. He then appeared in an episode of Without a Trace, which starred one-time Enterprise guest actor Enrique Murciano.

In 2009, Billingsley made an appearance in an episode of NBC's Scrubs, in which he played a patient of the show's protagonist. Ken Jenkins was a regular on this series. In 2010, Billingsley was seen on such shows as Leverage (with Spencer Garrett) and Outlaw (with Ed Begley, Jr. and Josh Pais). He also guest-starred in an episode of The Mentalist entitled "Red Moon," in which he played a faux psychic who tries to help in a homicide investigation only to become a suspect. This episode reunited Billingsley with his Enterprise co-star Connor Trinneer, who played a deputy.

Billingsley currently stars in the 2014 TV series Intelligence as the doctor of the protagonist, in which he installed the neural enhancement chip.

In 2019, he appeared on The Orville as Cambis, a character with a grudge against the father of Alara, Ildis, who is himself played by Star Trek: Voyager alumni Robert Picardo (The Doctor).

In 2007, Billingsley was said to be reuniting with Enterprise co-star Gary Graham for a zombie series called Alive, co-created by Judith and Garfield Reeves-Stevens. Billingsley participated in one of a series of viral online videos teasing the potential series, which was to air on cable sometime in the summer or fall of 2008. [2] As of 2010, however, there has been no further development on the project. 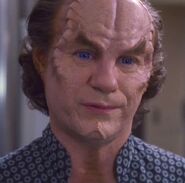 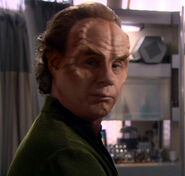 Organian (in the body of Phlox)
(ENT: "Observer Effect") 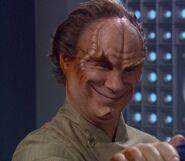