He also appeared in the Mission: Impossible episode "The Crane" (1970, with Leonard Nimoy and Don Eitner). Blower worked for thirty years as an actor in film and television productions such as in the crime drama The Godfather (1972). [1] 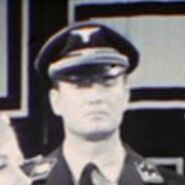 Retrieved from "https://memory-alpha.fandom.com/wiki/John_Blower?oldid=2702630"
Community content is available under CC-BY-NC unless otherwise noted.