Multiple characters
John Eddy Copage (born 25 March 1925; age 96) is an actor who portrayed Elliott in the Star Trek: The Original Series second season episode "The Doomsday Machine". He filmed his scenes on Monday 26 June 1967 at Desilu Stage 9. Twenty-five years after his work on TOS he returned to the Trek franchise and appeared as a background actor in several episodes of Star Trek: The Next Generation as an Enterprise-D officer. In 1994 he joined Star Trek: Voyager as a Voyager officer, appearing as a regular background actor throughout the first four seasons of the show. He also worked in the background of Star Trek: First Contact.

Copage, whose day job was as a real estate broker, was first married to the actress Alibe Peak, and together they had two sons, including Marc Copage, who was a child actor and series regular on Julia. [1] Their eldest son, actor and reporter Eric Copage, was married to television writer Robin Amos. [2]

Copage's own acting career, which spanned nearly thirty years, began with an appearance in the 1964 Ernest Hemingway film The Killers, which was written by Gene Coon, and starred such noted actors as Lee Marvin, Angie Dickinson, and Ronald Reagan. Also appearing in the film were Star Trek alumni Robert Phillips, Davis Roberts, Carey Loftin, and Seymour Cassel.

Following his appearance in The Killers, Copage made several television appearances during the 1960s, including Bewitched (1964), The Man from U.N.C.L.E. (1965; with Warren Stevens, series theme composed by Jerry Goldsmith), Mission: Impossible (1967; with Martin Landau, Brock Peters, Davis Roberts, Bob Johnson, and stuntman Dick Dial), two appearances on The Ghost & Mrs. Muir (1968 and 1969; featuring Kellie Flanagan), and Bracken's World (1969; starring Warren Stevens and Madlyn Rhue, with Alan Bergmann and Booker Bradshaw). Copage also appeared in the 1968 film With Six You Get Eggroll with former Star Trek alumni Vic Tayback and stunts by Carol Daniels and Charlie Picerni, along with Brian Keith.

In 1969, Copage also co-wrote to original screenplays, titled Adventures of Little Diego and Max A. Million; while both scripts were copyrighted, neither were realized.

Over the next three decades, Copage had three additional acting credits to his name, one in each decade. During the 1970s, it was the 1971 horror film Simon, King of the Witches, with such future Trek actors as Andrew Prine and Frank Corsentino. During the 1980s, he appeared in episodes of Dynasty (1986, with Joan Collins, Gene Poe, and Suzanne Lodge) and Mr. Belvedere (1987, with Mario Roccuzzo), and during the 1990s, he appeared in the 1990 comedy horror spoof Repossessed, which featured a plethora of Trek actors and stuntmen, including, Willie Garson, Barbara Alyn Woods, Norman Large, Ian Abercrombie, Tom Morga, Jim Palmer, Paul Stader, George P. Wilbur, and Brian J. Williams. 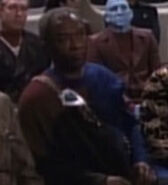 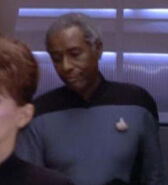 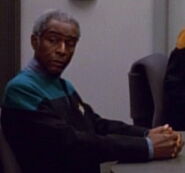