John Putch (born 27 July 1961; age 61) is an actor and director from Chambersburg, Pennsylvania who has played three different characters in the Star Trek universe, two of which were Benzites.

Putch was born and grew up in Chambersburg, Pennsylvania, the son of Emmy- and Golden Globe-winner Jean Stapleton, and producer and director William H. Putch. At the age of five, he appeared in plays at The Totem Pole Playhouse, his parents summer stock company, along with his sister, Pamela. As he grew older, Putch began to assist with the backstage organization, at first helping out by parking cars and running the follow spot for musicals, though his interest eventually turned to directing, on his father's encouragement.

Although his desire was to have a directing career, Putch ultimately decided to go down the acting route during his junior high, however this was more of a means to an end; the film school he applied to was full, so he "went out into the workforce and [he] worked quite a bit in the '80s as an actor." [1]

Putch's first ever acting credit was for an episode of All in the Family which co-starred his mother, Jean Stapleton. In the episode "Archie Is Branded," he played the Boy Scout who complained about the way Archie Bunker hung an American flag on his front door to conceal the swastika that vandals had painted on it. He also had guest roles in Family Ties, and Home Improvement, as well as a recurring role in the sitcom One Day at a Time.

He later went onto appear in the TV movies The Wave (1981, with Bruce Davison) and Kenny Rogers as The Gambler: The Adventure Continues (1983, with Gregory Sierra), however his feature film debut came in 1983 in the form of Jaws 3D, a film he considers "one of the worst movies ever made." Though he is still happy he was cast in it; "It's so much fun to see it…I'm proud of it, by the way, being in one of the worst movies ever made. We all thought, 'This is it, our luck's going to change now.' Boy, it sure didn't…Some people argue that 4 [Jaws: The Revenge] was even worse, but I really don't think it is. Jaws 3 was the worst. I was hoping the 3D would enhance my performance, but it didn't." [2]

Later that year, Putch directed and starred in Waiting to Act (with Ed Begley, Jr.) and went on to appear in in Impure Thoughts (1986, alongside Brad Dourif). In addition, he performed in Double Agent (1987, with Michael McKean) and Something is Out There (1988, with Brian Thompson and Gregory Sierra) before appearing in Star Trek.

In 1989, Putch guest-starred in an episode of 21 Jump Street before appearing in the TV movies Men at Work (1990, with Leslie Hope) and After the Shock (1990, again alongside Brian Thompson). He also played Matt Draughon in every episode of the short-lived series Room for Two (with Max Grodénchik). After Room for Two, he went to play small roles in Beyond Suspicion (1993, with Kelsey Grammer and Corbin Bernsen) Clear and Present Danger (1994, with Vaughn Armstrong, Raymond Cruz and Harris Yulin), and Camp Nowhere (1994, with Jonathan Frakes, Kate Mulgrew, Christopher Lloyd and Ron Fassler).

After his role in Star Trek: Generations (1994), Putch appeared in episodes of Touched by an Angel, The Crew and Murder One (alongside John Fleck), and the TV movies My Ghost Dog (1997) and The Patron Saint of Liars (1998). During 1998, Putch appeared in four films; City of Angels, Freedom Strike, Spoiler (with Jeffrey Combs) and The Souler Opposite. In 1999, Putch briefly returned to television with guest star roles in L.A. Heat and Home Improvement.

In 2000, Putch played Agent Joe Lambert in Chain of Command, had a minor role in Tycus, and appeared in an episode of Stark Raving Mad. The following year he worked with Michael Dorn on Mach 2 and J. Patrick McCormack on Crash Point Zero, before achieving his final acting credit with The Confidence Man. From 2002 onwards, Putch made the decision to focus on directing.

Putch took up directing in 1985, with his directorial debut being the film Waiting to Act starring Ed Begley, Jr., Helen Hunt and Lance Guest. Through the mid-90s, he continued his passion for directing, gaining work on the episodic television show Big Bad Beetleborgs before going on to direct the films The Boy Who Saved Christmas (1998), Valerie Flake (1999), Intrepid (2000) and Tycus (2000, in which he also appeared).

From this point on, Putch dropped his acting career – which had been supporting him – in favor of directing. "I used my acting earnings to support my filmmaking habit," Putch recalled in a 2007 interview. "About the mid-'80s I was really hoping it would turn and I would be able to get directing work in the same business I was an actor. It took me about 10 years to break in for my first big job. I found it to be not as easy as for some people, but I finally got in there and started working and, when I was able to, I stopped acting…" [3]

Indeed, after directing episodes of Son of the Beach and Madison Heights, Putch's new career soon began to take off. In 2003, he directed BachelorMan and A Time to Remember, but probably one of his biggest films was the TV movie remake of The Poseidon Adventure (2005).

In 2006, he directed Star Trek: Deep Space Nine guest star Kevin Rahm in Mojave Phone Booth, a film Putch also co-wrote with Jerry Rapp. But the film was more than just another directing job for Putch. He also wanted to show that a lot could be accomplished without necessarily sticking to "Hollywood philosophy." "I believe that a compelling story can be told without it costing an arm and leg," he said in a director's statement, "and I opine that most films have lost touch with the grass roots of that idea." In fact, Putch believed so much in the idea that he set the film's budget at just $38,469.49 and insisted that all of his cast and crew muck in to get the film made. [4]

Putch carried these ideals over to Route 30 in 2007, which he also wrote. In fact, he even hired some of the same actors. Speaking prior to filming, Putch shared; "I don't even know if it would work trying to do it with new people, and frankly I don't want to do it with new people. I loved working with every one of those people and I'd like to work with them again and I'd like to share a new experience together of our own." And from the technical side of things; "I am going to try to use less equipment and tweak it a bit from what I learned in the last round." [5]

After Route 30, Putch directed Murder 101: College Can Be Murder (2007) and an episode of Valentine entitled "Act Naturally" in 2008, featuring Trek performers Autumn Reeser and Patricia Tallman. The late-2000s saw Putch direct episodes of the popular television shows Scrubs (with main cast member Ken Jenkins), Ugly Betty, My Name Is Earl, and Cougar Town. In 2009, he directed American Pie Presents: The Book of Love, the fourth film in a spin-off series to the three original American Pie films (which co-starred John Cho). More recently, Putch has directed episodes of the TV series Outsourced and Friends with Benefits, as well as the movie Beethoven's Christmas Adventure (2011), which starred Robert Picardo and Kim Rhodes.

In Putch's latest project, he has written, directed and produced a new Route 30 film entitled Route 30, Too! The film, set to be the second in a proposed trilogy, was shot in Putch's home town of Chambersburg, Pennsylvania over a 19 day period in December 2010. Made with twice the budget of the first, the film is also set to include many more special effects and will be released some time in 2012. [6] [7] [8] John completed the trilogy with 2014's Route 30 Three! Which tied up the entire trilogy that is now available on DVD and streaming. In 2016 Putch released a highly personal film that he wrote and directed entitled The Father and The Bear. The film is about a retired actor with diagnosed dementia who longs to perform at his beloved summer theater one more time. The film is still in release and has garnered many film festival awards. Putch continues to direct television. Hour and half hours.

Putch made his first Star Trek appearance in 1988, playing the Benzite "Mordock." A Star Trek: The Original Series fan, Putch was delighted with the chance to appear on Star Trek: The Next Generation; "When I got to work on the show it was really fun. I was an alien-of-the-week. Big make-up deal. Michael Westmore made a giant head for me and it was fun. I became a trading card and an action figure." [9]

In 1989, he went on to play another Benzite, "Mendon", awarding him the honor of being the first TNG guest star to play two separate characters from the same species. Though happy with being welcomed back to the show, Putch later understood there was an ulterior motive for his re-casting; "I was all very impressed by that. I thought, 'Ah, they love me, they love me.' What they really loved was that it was me, because they'd spent all that money on making that blue head and it was form fitted to me…I don't fault them for that. I would have done the same thing, but it's funny how you are naive about these things when you're just an actor." [10]

Putch's final Star Trek role came in 1994, when he briefly appeared as a journalist in Star Trek Generations. Of the experience, Putch recalled; "It was the same casting director, Junie Lowry, who's been a friend for years. If you work enough for the same casting directors, they call you over and over again. She was casting the movie and she called a lot of people in who did the series and asked for favours for these small parts. It was pretty funny. I'm on the bridge with William Shatner. I've got so many good stories. Funny stuff. Someday I'll write a book." [11] 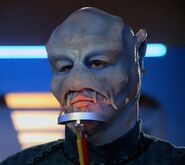 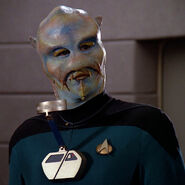 Mendon
TNG: "A Matter Of Honor" 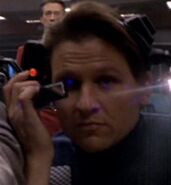