John Saint John (also known as John St. John) is an actor and stunt performer who appeared in several episodes of I AM ERROR and I AM ERROR. Beside his two Human appearances, he portrayed different background Klingons in the latter series. [2] The robe from his appearance in "The House of Quark" was sold off on the It's A Wrap! sale and auction on eBay. [3] Saint John assisted Central Casting and Casting Directors Junie Lowry-Johnson and Ron Surma by casting the Native American background performers for the episode "Journey's End".

Saint John graduated from the John Marshall High School in Los Angeles, California in 1976 and attended the Los Angeles Trade Tech College. He is a Screen Actors Guild member since 1994 and has worked as security officer, camera operator, and technical adviser. He was a regular background actor in the television series Dr. Quinn, Medicine Woman between 1993 and 1998, in which he appeared alongside regulars Joe Lando, Chad Allen, Frank Collison, Barbara Babcock, Erika Flores, Helene Udy, Gail Strickland, and Nick Ramus. Saint John worked as a stand-in on the television series Family Law (starring Christopher McDonald, Julie Warner, and Salli Elise Richardson), performed stunts and precision driving stunts in the action film A Man Apart (2003), the remake Starsky & Hutch (2004), Wes Craven's horror film Cursed (2005), and in the comic adaptation Iron Man (2008).

In addition he portrayed background and supporting roles in the television series Roswell (starring William Sadler and produced by Jonathan Frakes), Parent Hood, Grey's Anatomy, My Name is Earl, and The Shield, the thriller On Deadly Ground (1994), the drama Sioux City (1994, with Salli Elise Richardson), the science fiction thriller The One (2001), the comedy Say It Isn't So (2001), the short comedy Pennyman (2002), Spike Jonze's drama Adaptation. (2002), and the drama Destricted (2006). 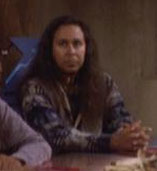 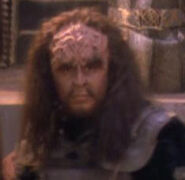 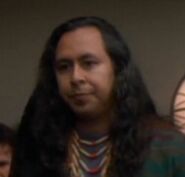 Klingon Council member
DS9: "The House of Quark"
(uncredited)
Add an image to this gallery

Retrieved from "https://memory-alpha.fandom.com/wiki/John_Saint_John?oldid=2336829"
Community content is available under CC-BY-NC unless otherwise noted.