Klingon Ambassador
Antaak
Two others
John Schuck (born 4 February 1940; age 82) is an actor who has appeared in two Star Trek films and three Star Trek spin-off series. He played the Klingon Ambassador in Star Trek IV: The Voyage Home and reprised this role in Star Trek VI: The Undiscovered Country. He went on to play another Klingon, Doctor Antaak, in the Star Trek: Enterprise fourth season episodes "Affliction" and "Divergence". In between, he made appearances – as non-Klingons – on Star Trek: Deep Space Nine and Star Trek: Voyager.

Schuck was born Conrad John Schuck (a name he still uses on stage) in Boston, Massachusetts. After graduating from Denison University, where he was involved in a number of college stage productions, Schuck moved on to regional theater, first joining the Cleveland Playhouse and later Baltimore's Center Stage.

It was while he was performing with the American Conservatory Theatre in San Francisco, California, that Schuck was discovered by film director Robert Altman. Altman cast Schuck in his first film role – that of dentist Walt "The Painless Pole" Waldowski – for the cult 1970 war comedy MASH. As a cast member on this film, Schuck was the first person to utter the word "fuck" in a mainstream feature film. His exact line – spoken during the climactic football game to an opposing (and imposing) team member – was "Your fucking head is coming right off." (Enlisted: The Story of MASH)

Co-starring with Schuck in MASH were one-time Star Trek: The Original Series guest stars Sally Kellerman and Fred Williamson and future DS9 star Rene Auberjonois. Schuck, Kellerman, and Auberjonois went on to co-star together in two more films for Robert Altman: Brewster McCloud (also featuring William Windom) later in 1970, and McCabe & Mrs. Miller, co-starring Keith Carradine, Robert Fortier, and Bert Remsen, in 1971. He and Auberjonois also co-starred together in the 1971 TV movie Once Upon a Dead Man, although this project was not directed by Robert Altman.

In 1974, Schuck had perhaps his most prominent film role as one of three bank robbers in Robert Altman's crime drama Thieves Like Us. His partners-in-crime were played by aforementioned Trek alumni Keith Carradine and Bert Remsen, while Louise Fletcher also starred. This film also proved to be Schuck's final collaboration with director Robert Altman. Schuck's other film credits during the 1970s included an uncredited appearance in Midway (1976, starring Edward Laurence Albert and featuring Phillip Richard Allen, Glenn Corbett, Robert Ito, and Clyde Kusatsu) and a supporting role in the 1979 film Butch and Sundance: The Early Days (co-starring Peter Brocco, Jeff Corey, Christopher Lloyd, Vincent Schiavelli, Peter Weller, and Noble Willingham).

From 1971 through 1977, Schuck played the long-suffering and loyal Sgt. Charles Enright on the NBC series McMillan & Wife, known simply as McMillan during its sixth and final season. During that final season (1976-77), he was also starring as Gregory 'Yoyo' Yoyonovich in the short-lived ABC comedy Holmes and Yo-Yo, although that series was pulled after the first eleven of thirteen episodes aired in 1976 (with the last two not airing until in late 1977).

In addition to his regular roles on McMillan & Wife and Holmes and Yo-Yo, Schuck's televisions credits during the 1970s consisted of guest spots on several popular TV shows. In 1970 alone, he made appearances on Gunsmoke (although he first appeared on this show in a 1969 episode with Bill Erwin), Mission: Impossible (during the time Leonard Nimoy was a regular), Mary Tyler Moore, and Room 222. He followed this with appearances on such shows as Bonanza (playing the son of a character played by Jeff Corey), Ironside (in a 1972 episode with Paul Carr), Cade's Country (with Bernie Casey and Leslie Parrish), The Love Boat (with Adrienne Barbeau and Richard Lineback), Fantasy Island (starring Ricardo Montalban, in a 1978 episode with Henry Gibson), and Turnabout (starring James B. Sikking). He even appeared in the highly-acclaimed 1977 mini-series Roots, which also featured fellow Trek veterans LeVar Burton, Madge Sinclair, and Ben Vereen, as well as the 1978 mini-series Greatest Heroes of the Bible, directed by James L. Conway and co-starring Michael Ansara, Paul Carr, Ted Cassidy, Jeff Corey, Frank Gorshin, Ed Lauter, Julie Parrish, Nehemiah Persoff, and Dean Stockwell.

During the 1982-83 TV season, Schuck was a regular on an attempted revival of The Odd Couple titled The New Odd Couple, co-starring Ron Glass. In 1984, he had a recurring role on St. Elsewhere, during which time he appeared with the likes of Chad Allen, Ed Begley, Jr., Ellen Bry, Norman Lloyd, Jennifer Savidge, and Brian Tochi. And from 1988 through 1991, Schuck starred as Herman Munster on The Munsters Today, opposite Lee Meriwether's Lily Munster and Jason Marsden's Eddie Munster.

His other TV credits during the 1980s include a second appearance on Ricardo Montalban's Fantasy Island and guest appearances on Murder, She Wrote (two episodes, including one with Kim Darby, Vince Howard and Eric Server in 1984), Matlock (in a 1987 episode with Stanley Kamel), L.A. Law (starring Corbin Bernsen), and several episodes of Simon & Simon (including one with Susan Oliver in 1987). In 1985, he appeared in the Faire Tale Theatre production of "Puss in Boots" with Brock Peters, Ben Vereen, and Alfre Woodard. The 1980s also saw Schuck appear in such films as James L. Conway's Earthbound (1981), the 1987 comedy Outrageous Fortune (with Christopher McDonald), and the 1988 family film The New Adventures of Pippi Longstocking (with Branscombe Richmond), in which Schuck played the father of the title character.

He has also made guest appearances on Live Shot (with Casey Biggs, Ron Canada, and Bruce McGill), NYPD Blue (starring Gordon Clapp and Sharon Lawrence), and Law & Order, among other shows. In addition, Schuck was the second of two actors to play the Minbari Draal on Babylon 5, appearing in two episodes of that series (one in 1995, another in '96), during which time he worked with Andreas Katsulas, Bill Mumy, and W. Morgan Sheppard. Before working together on Enterprise, Schuck and Enterprise star Scott Bakula worked with Ron Perlman and David Graf in the made-for-TV movie The Trial of Old Drum. More recently, Schuck had a recurring role as the Chief of Detectives on Law & Order: Special Victims Unit.

For many decades, Schuck has played "Daddy Warbucks" in the musical Annie on Broadway as well as in touring engagements and other venues. He also had success touring as part of the cast of Annie Get Your Gun, in which he played the male lead, Frank Butler. In addition, he has participated in productions of such musicals as The Sound of Music, Peter Pan, South Pacific, and White Christmas. 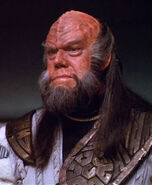 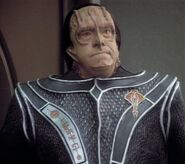