John Bear Staible (born 1939) is an actor who appeared in two Star Trek films and in an episode of Star Trek: The Next Generation. He received no credit for his appearances.

Staible also appeared in the Hart to Hart episode "A Change of Hart" (1983, with Julie Newmar and Perry Lopez) and was a regular background actor, portraying a bailiff, in the comedy series Night Court (1984-1992, starring John Larroquette). He also worked as a regular background actor on both season of the series Hooperman (1987-1989, with Conrad Hurtt and starring Barbara Bosson) and was a background actor on the crime drama The Presidio (1988, with Jenette Goldstein, Jessie Lawrence Ferguson, Patrick Kilpatrick, Clay Wilcox, Jophery C. Brown, Allan Graf, Frank Orsatti, and Conrad Hurtt). 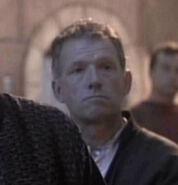 Tau Cygna V colonist
TNG: "The Ensigns of Command"
(uncredited)
Add an image to this gallery

Retrieved from "https://memory-alpha.fandom.com/wiki/John_Staible?oldid=2496006"
Community content is available under CC-BY-NC unless otherwise noted.