John Thaddeus Battistessa (born 24 October 1960; age 59) is an actor and voice artist who appeared in several episodes of Star Trek: Voyager. For the fourth season episodes "Year of Hell" and "Year of Hell, Part II", Thaddeus filmed his scenes on Friday 15 August 1997, Friday 22 August 1997, Monday 25 August 1997, and Tuesday 26 August 1997 on Paramount Stage 9. His costume from these episodes was later sold off on the It's A Wrap! sale and auction on eBay. [1]

Born in Teaneck, New Jersey, he has started his stage acting career in the 1980s. Thaddeus is divorced, has three children, and is engaged to girlfriend Sharon.

Among his acting resume are films such as Sea of Love (1989, with Deborah Taylor), Octopus 2: River of Fear (2001, with Michael Reilly Burke), and McBride: It's Murder, Madam (2005, with John Larroquette, Marta Dubois, Joel Polis, and Marcy Goldman). He also worked as a stand-in on the film Phoenix (1998, with Glenn Morshower, George Murdock, and Scott Leva).

Beside acting in front of the camera, Thaddeus has also been a voice artist and worked as ADR voice actor on several films and series including Ally McBeal, Boston Public, and Boston Legal. 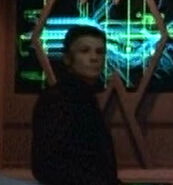 Retrieved from "https://memory-alpha.fandom.com/wiki/John_Thaddeus?oldid=2419629"
Community content is available under CC-BY-NC unless otherwise noted.