Blalock was born in San Diego, California. During her youth, she became a huge fan of Star Trek: The Original Series (becoming a self-confessed Trekkie), with her favorite character on the program being Spock. It seems only fitting, then, that she was given the role of the Vulcan T'Pol, whose presence on Enterprise serves as a lead-in for Spock in the original series, set over a hundred years later.

She began acting as a child, performing in school plays, and began modeling when she was in her teens. At the age of 23, she made her first television appearance in an episode of the sitcom Veronica's Closet (1998, episode Veronica's Breast Efforts), starring Kirstie Alley and with Wallace Langham and Mark Harelik. This was followed with a lead role in the 2000 made-for-TV movie Jason and the Argonauts, in which she played the role of Medea. Also starring in this movie were fellow Trek alumni Frank Langella and Brian Thompson. Also in 2000, Blalock made a guest appearance in an episode of the UPN series G vs E called "Cougar Pines". Also guest-starring in this episode was her future Enterprise castmate John Billingsley and Star Trek: The Next Generation guest actor Clayton Rohner.

In 2001, prior to winning the role of T'Pol on Enterprise, Blalock starred in the TV mini-series Diamond Hunters and made an appearance in a segment of the TV movie On the Edge, which also featured Christopher Lloyd and Bruce Davison. Blalock went on to co-star with Davison in the Enterprise episode "The Seventh". While Enterprise was in production, Blalock appeared as Ishta in two episodes of the acclaimed science fiction series Stargate SG-1, "Birthright" (2003) and "Sacrifices" (2004), the latter one alongside Tony Amendola.

Other television series she joined as a guest actress include The Love Boat: The Next Wave (1999, with Phil Morris and Rick Pasqualone), D.C. (2000, alongside Kristanna Loken and future Enterprise co-star Joanna Cassidy), CSI: Crime Scene Investigation (2000, with Erich Anderson), and JAG (2001, with Rif Hutton and directed by Enterprise director James Whitmore, Jr.).

In 2001, Blalock was offered the role of Vulcan Sub-Commander T'Pol on the fourth Star Trek spin-off series, Enterprise. Although she was a fan of the original Star Trek series, none of the spin-offs had interested her, so she initially rejected the offer to play T'Pol. After passing on the role a second time, her agent gave her the script for "Broken Bow"; upon reading the script, Blalock changed her mind and accepted the offer. [1][2]

Each day of filming on Enterprise, Blalock underwent two hours of makeup to become T'Pol. Upon joining the series, she had to have her belly button ring removed. Early in the production, shooting was temporarily halted when Blalock was hospitalized after suffering from a burst ulcer in her colon. [3]

Blalock played the role of T'Pol in all 97 episodes of all four seasons of Star Trek: Enterprise, beginning in 2001 and ending in 2005. Her last day of filming coincided with her 30th birthday. [4] For her performance on the show, she won a Saturn Award and a special "Cinescape Genre Face of the Future" award from the Academy of Science Fiction, Fantasy & Horror Films in 2002. She also received Saturn Award nominations in 2003 and 2004.

Blalock was an outspoken critic of the direction Enterprise had taken in its third season, accusing the series of lacking creativity and accusing the producers for being out of touch with the fans. Although she saw season four as an improvement over anything that had come before, she severely criticized the series finale, "These Are the Voyages...", because of its lack of focus on the Enterprise crew, going so far as to call the episode "appalling." [4] However, she later remarked that she understood the rationale behind the writers' reasons for including cast members from The Next Generation in the final episode. [1](X) Of Blalock's criticisms, executive producer Brannon Braga thought she "might be overreacting a bit." [2]

Although initially reluctant to appear at Star Trek conventions, Blalock is currently an active participant in the convention circuit.

During a break in filming Enterprise, Blalock was cast in her feature film debut in the thriller Slow Burn, co-starring Bruce McGill. The film premiered at the Toronto Film Festival in 2005 but was not released into conventional theaters until April 2007. She then appeared in another thriller, Shadow Puppets, along with Tony Todd and James Marsters. This film was released on DVD in July 2007.

On television, Blalock starred in the Lifetime movie I Dream of Murder. She also filmed an appearance on the hit ABC created series Lost, co-created by later Star Trek producers J.J. Abrams and Damon Lindelof and starring Daniel Dae Kim and Terry O'Quinn. On this series, Blalock was to appear as a former love interest of Sawyer (played by Josh Holloway) in the second season episode "Adrift." According to a podcast on LostCasts, however, the story was altered before filming was complete and Blalock's scenes were scrapped. Images of Blalock's scenes have since appeared online.

Blalock starred as Captain Lola Beck in the heavily-promoted 2008 direct-to-DVD film Starship Troopers 3: Marauder, a sequel to the 1997 film Starship Troopers starring Dina Meyer. Also in 2008, Blalock made a guest appearance on the series CSI: Miami, along with Chad Allen. More recently, Blalock filmed a role on 10 Items or Less, the TBS sitcom co-created and executive produced by recurring Star Trek: Voyager actress Nancy Hower and starring Robert Clendenin. On the show, Blalock portrayed a version of herself in an episode titled "Star Trok", which was directed by Hower.

In 2009, she appeared in an episode of the FOX medical drama House entitled "Teamwork." This episode was Jennifer Morrison's last as a regular on the show. In 2010, Blalock appeared in the independent action film, Sinners & Saints, and in two episodes of the fantasy-adventure series Legend of the Seeker. [3] Kenneth Biller and Mike Sussman were among the writers and producers on this series. In 2011, she made an appearance in the independent feature called One Kine Day, alongside Julia Nickson. In 2014, Blalock made an appearance in the comedy Sex Tape.

In addition to her appearances in television series and films she is also an occasional model and was photographed for magazines such as FHM, Maxim, and for Playboy. She also acted in the internet short film Queen for a Day in 2000 and appeared in the 1999 music video Denise for the group Fountains of Wayne.

Besides acting, Blalock is also an avid surfer, an activity she has enjoyed since she was a child. She also enjoys a number of other sports (including snow boarding and skateboarding) and is also a skilled artist.

She and husband Michael welcomed their first child, son Ryder James Rapino, on May 25, 2010. 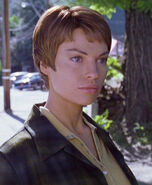 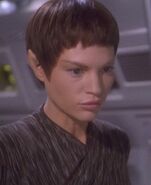 Organian (in the body of T'Pol)
(ENT: "Observer Effect") 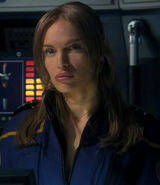 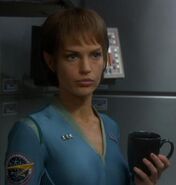