Joly is the last name of a background actress who appeared as a Bajoran in the Star Trek: The Next Generation fifth season episode "Ensign Ro". She filmed her scenes on Monday 5 August 1991 on location at Bronson Canyon. She also appeared as a command division ensign in the episode "The Game" for which she filmed her scenes on Wednesday 28 August 1991, Thursday 29 August 1991, and Friday 6 September 1991 on Paramount Stage 8.

Beside her work on screen, Joly worked as stand-in for guest actress Sheila Franklin on the fifth season episode "A Matter of Time" and worked on Wednesday 2 October 1991 on Paramount Stage 8. She was also scheduled to work in Ten Forward scenes in this episode but did not appear. Joly was also scheduled to work on the episode "Hero Worship" in corridor scenes but was not part of the final episode. 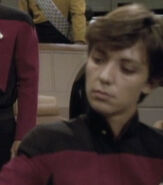 Starfleet ensign
TNG: "The Game", "Violations"
(uncredited)
Add an image to this gallery
Retrieved from "https://memory-alpha.fandom.com/wiki/Joly?oldid=2441540"
Community content is available under CC-BY-NC unless otherwise noted.