The son of Connor and Moira Rossa, Jeremiah was born in 2353 at the Galen IV colony. Jeremiah's parents were both killed during a Talarian attack on the colony during the Galen border conflict in 2357. However, he was subsequently claimed by the Talarian officer Endar, who treated him like his own son and gave him the name "Jono". While living with Endar, Jono fractured his ribs, arm, and sustained a concussion, all attributable to childhood accidents, rather than child abuse.

He was rescued by the USS Enterprise-D in 2367 from a disabled Talarian observation craft. When Captain Jean-Luc Picard discovered his identity, he tried to bring out Jono's Human side. Jono at first responded, but later tried to murder Picard by stabbing him with a d'k tahg. He did this hoping he would be put to death and would not have to choose between his Human side and Talarian side. He finally decided to stay with his "real" father, Endar. (TNG: "Suddenly Human")

Jono was played by Chad Allen.
Unknown actors portrayed the photographs of Jono as infant and 4 year old boy. An unknown voice actor provided the voice over of him during his nightmare.
The character shares a name with the Irish patriot Jeremiah O'Donovan Rossa. 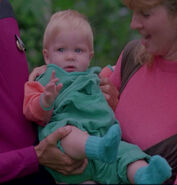 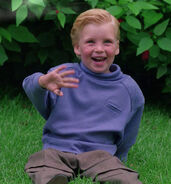 Jeremiah Rossa in 2357
Add an image to this gallery

Retrieved from "https://memory-alpha.fandom.com/wiki/Jono?oldid=2744820"
Community content is available under CC-BY-NC unless otherwise noted.