He filmed his scene for "Redemption II" on Tuesday 16 July 1991 on Paramount Stage 16. His costumes from his other two appearances were later sold off on the It's A Wrap! sale and auction on eBay. [1] [2]

Jordan Lund has appeared in many films, his career started in the 1980s. His appearances include Jacknife (1989, with Ivar Brogger, Josh Pais, and Victor Talmadge), Fletch Lives (1989, with Richard Libertini, Matthew Kimbrough, and Tom McCleister), She's Back (1989, with Robert Joy, Joel Swetow, and Erick Avari), Lock Up (1989, with David Anthony Marshall).

Some of his television work include a recurring role in the 1998 TV series Mercy Point as Dr. Batung. Jordan appeared in some TV films, which include The Trial of Bernard Goetz (1988, with Richard Libertini, Andrew Robinson, and Peter Crombie, his other role was in the hit ABC Stephen King miniseries The Stand (1994, with Miguel Ferrer, Sam Anderson, Richard Lineback, Matt Frewer, Patrick Kilpatrick, Steven Anderson, Ken Jenkins, Sherman Howard, William Newman), he appeared in the hit Fox TV movie Alien Nation: Dark Horizon (1994, with Gary Graham, Eric Pierpoint, Ron Fassler, Susanna Thompson, Michael Durrell, and Terrence Evans). In 2007, he appeared in the TV movie Nurses (with Melinda Page Hamilton and Jeff Chase). 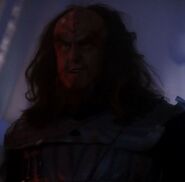 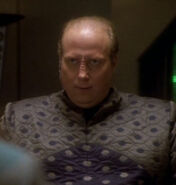 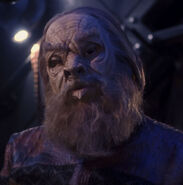 Skalaar
ENT: "Bounty"
Add an image to this gallery

Retrieved from "https://memory-alpha.fandom.com/wiki/Jordan_Lund?oldid=2530539"
Community content is available under CC-BY-NC unless otherwise noted.