As the Enterprise comes under attack on the way to a diplomatic conference on Babel, one of the alien dignitaries is murdered, and Spock's estranged father Sarek is the prime suspect – but he is also deathly ill, and only Spock can save him.

The USS Enterprise arrives in orbit around the planet Vulcan, picking up the last delegation of Vulcans to add to an assortment of 114 ambassadors and dignitaries aboard (including Andorians and Tellarites). The delegates will be attending a conference on the neutral planetoid named Babel to decide the admission of the planet Coridan to the Federation, which is rich in dilithium but is poorly defended. As the Vulcan delegation arrive on the shuttle Galileo, Kirk, Spock, and McCoy greet the Vulcan ambassador to Earth, Sarek, and his Human wife Amanda. Welcoming the ambassador aboard, Kirk offers to have Spock take him and his wife on a tour of the ship, but Sarek coldly asks that someone else give it. Sensing unpleasantness between the two Vulcans, the captain suggests to Spock that, with two hours before the ship leaves orbit, he should beam down to the planet and visit his parents, which Spock insists would be unnecessary, for the ambassador and his wife, in fact, are his parents.

"Captain's log, stardate 3842.3. We have departed Vulcan for the neutral planetoid code-named Babel. Since it is in our sector, the Enterprise has been assigned to transport ambassadors of Federation planets to this vitally important council. The issues of the council are politically complex, the passengers… explosive."

As Kirk conducts a tour of the ship for the ambassador and his wife, he seeks out the roots of estrangement between Spock and his parents once they pass by Spock in Engineering. The rift seemingly sprang from Spock's election to attend Starfleet Academy over his fathers' choice of the Vulcan Science Academy as Sarek followed his father's teachings. Kirk voices support of Spock's choices and notes that he has a personal friendship with Spock to his mother Amanda, who appreciates the sentiment but also warns that the estrangement between father and son may be permanent, since it has been 18 years.

"Captain's log, stardate 3842.4. The interplanetary conference will consider the petition of the Coridan planets to be admitted to the Federation. The Coridan system has been claimed by some of the races now aboard our ship as delegates, races who have strong personal reasons for keeping Coridan out of the Federation. The most pressing problem aboard the Enterprise is to make sure that open warfare does not break out among the delegates, before the conference begins."

The delegates meet at a reception on the Enterprise. The Tellarite ambassador, Gav, confronts Sarek asking about his vote on Coridan's admission, to which he replies that it would be known at the conference.

Kirk and Sarek move on to other guests while McCoy discovers a hint of Spock's childhood from Amanda, that he had a pet sehlat, "a fat teddy bear," as Amanda says, delighting the doctor. Spock corrects his mother's sentiment, saying that on Vulcan, the "teddy bears" are alive and have six-inch long fangs.

Kirk also learns the Enterprise is being tailed by a mysterious unidentified vessel. On the bridge, they determine that the vessel is an unknown configuration, unauthorized, and not responding to hails. Kirk orders an intercept to take a closer look.

Meanwhile, Amanda speaks with her husband against their son's estrangement in their quarters, but Sarek resists, saying that Spock is due respect for his own achievements, not for feelings of pride. Amanda believes Sarek feels pride in Spock despite his disapproval of Starfleet but won't show it.

The unidentified vessel makes a pass at the Enterprise at warp 10 without firing.

Later, Sarek is again confronted by Gav at the reception area, and Sarek reveals that he would vote in favor of admission, citing that Coridan needs the Federation's protection against illegal dilithium mining, which alludes to illegal Tellarite mining operations on Coridan. A brief struggle between the two ambassadors ensues, broken up by Kirk who just arrived.

Kirk, Spock, and McCoy investigate Gav's murder. McCoy explains his neck was broken in a very precise manner, leading Spock to conclude it can only be a Vulcan execution technique called tal-shaya. Kirk then deduces that Sarek is logically the prime suspect, but when he is confronted by Kirk, Spock, and McCoy, it is revealed that Sarek is becoming increasingly ill with a cardiac defect, and claims he could not have committed the murder, as he was in solitude at the time of Gav's death on the Enterprise's observation deck. McCoy takes him to sickbay.

Kirk and Spock go to the bridge and rule out the Romulans and Klingons. Uhura additionally finds that the communication signal is being received inside the ship, but not pinpointed.

It falls on McCoy to attempt to heal the ambassador with heart surgery, but the doctor has reservations, what with his own limited surgical experience on Vulcan physiology and the requirement of large amounts of a rare Vulcan blood type, T-negative. Spock elects to take the role of blood donor, risking his own life by taking a dangerous stimulant only tested on Rigelians to induce blood cell production despite Amanda's objections. They debate this for a while.

However, Kirk is suddenly stabbed by the Andorian delegate Thelev. He subdues Thelev in a corridor on deck five just outside his quarters and alerts Spock on the bridge through an intercom panel just before passing out in the corridor.

"Captain's log, stardate 3843.4. First officer Spock in temporary command. The captain has been critically wounded by one of the delegates to the Babel conference. The ship is on alert status. We are still being followed by the intruder vessel."

Thelev is placed into custody in the Enterprise's brig. Kirk has survived the assassination attempt, but now Spock refuses to participate in the procedure while his commanding officer is lying in sickbay, stating his first duty is to the ship, and cannot relinquish command due to "personal privilege."

He goes to the brig and questions Thelev. However, even under a verifier scan and truth drug, he does not answer. The lead Andorian doesn't know him that well, and can't help other than to say the Andorians have no quarrel with Kirk.

Amanda comes to Spock to convince him to help Sarek, but Spock's decision is unchanged. However, in a bold move, despite objections from McCoy, Kirk assumes command before he is fully healed, and sends Spock to surgery, with the intent of handing command over to Scotty while Spock is undergoing the blood transfusion and recover in his quarters. When he does, however, the alien vessel comes closer and Uhura picks up a signal and determines that it's being received in the brig. Kirk orders red alert and security to search Thelev.

As McCoy takes blood from Spock and begins to operate on Sarek, Thelev attempts to escape from his cell while being searched, but is stunned unconscious. As he falls his antenna breaks, revealing a transmitter used to communicate with the intruder vessel.

The intruder ship begins to open fire on the Enterprise. The smaller vessel makes unbelievably quick passes and phaser strikes against the larger starship, too fast for Enterprise to return fire effectively, missing with a phaser attack. Despite being faster than the Enterprise, their weapons only consist of standard phasers according to Ensign Chekov, indicating to Kirk they have little chance of success. The Enterprise continues to fight a battle against the smaller and faster ship, shuddering with each successive hit and suffering power losses. McCoy fears he may lose both his patients if the ship continues to take a pounding.

As Enterprise struggles against the unknown vessel, missing with a full spread of photon torpedoes, Thelev is brought to the bridge, where Kirk confronts him as to his true identity as a spy. Thelev is uncooperative, preferring to taunt Kirk and enjoy the view of his fellow ship succeeding over the larger Enterprise. As the power goes out in sickbay, Sarek goes into cardiac arrest. McCoy and Nurse Christine Chapel try to make do with portable resuscitation equipment in an attempt to restart his heart again.

Meanwhile, Kirk, fed up with Thelev's taunts and the other ship's apparently superior tactical ability, does the unthinkable. He drops the shields, then systematically fakes losing all power to lure the other ship in. The Enterprise appears dead in space. The enemy ship appears to hesitate, then slowly closes in for the kill. As soon as it is in range, Kirk delivers phaser fire that cripples the vessel, to the observing Thelev's disappointment. The mystery ship then self-destructs to avoid capture, and Thelev dies of an apparent suicide via slow poison.

In sickbay, Kirk discovers that Sarek's surgery was a success, and not only are he and Spock recovering well, but they are also talking again as father and son. They even tease Amanda together, Sarek explaining that despite her rampant emotions a marriage to Amanda seemed at the time the only logical thing to do. When Kirk orders McCoy to perform an autopsy on Thelev to determine his true identity, Spock surmises Thelev and the attackers in the enemy ship were Orions, who had much to gain from disrupting the Babel conference so they could continue to loot Coridan of its dilithium. Kirk then slumps, finally too exhausted and in too much pain to continue, but he continues to protest as he is led to another empty bed in the ward by McCoy and Nurse Chapel. McCoy, exercising his rightful medical authority over his patients, is eventually successful in telling Kirk and Spock to lie still and be quiet, finally and gleefully getting "the last word".

- McCoy to Kirk, on wearing the dress uniforms as they prepare for Sarek's arrival

"That hurts worse than the uniform."

- McCoy, after attempting a Vulcan salute

"Vulcans believe that peace should not depend on force."

- Amanda, to Kirk regarding Spock and Sarek

"Tellarites do not argue for reasons. They simply argue."

- Sarek, rebuking Gav on his need to know Sarek's vote at the conference

"On Vulcan, the teddy bears are alive. And they have six-inch fangs."

- Spock, describing a sehlat to McCoy

"You're showing almost Human pride in your son."

"It does not require pride to ask that Spock be given the respect which is his due…not as my son, but as Spock."

- Sarek, to his wife, Amanda, after being accused of having pride in his son, Spock

"Threats are illogical. And payment is usually expensive."

- Sarek, after Gav threatens to make him pay for his accusations

"Vulcans do not approve of violence."

- Spock, after McCoy states that Sarek is the prime suspect in Gav's murder

"Perhaps you should forget logic and devote yourself to motivations of passion or gain. Those are reasons for murder."

"You're Human, too. Let that part of you come through."

- Amanda, pleading with Spock to save Sarek's life

"My patients don't walk out in the middle of an operation."

- McCoy, as Spock tries to get up during Sarek's surgery

- Spock and McCoy, on the latter's attempt to leave in the middle of the operation to attend to matters on the bridge.

- Amanda, during a rare emotional outburst

"Emotional, isn't she?"
"She has always been that way."
"Indeed. Why did you marry her?"
"At the time, it seemed the logical thing to do."

- Spock and Sarek, teasing Amanda about her outburst

"Well, what do you know? I finally got the last word."

- McCoy, after successfully silencing everyone in sickbay 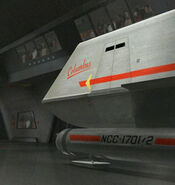 The hangar deck, with observers and Columbus added 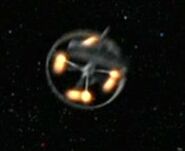 A more detailed view of the Orion ship

The next remastered episode that aired was "The Doomsday Machine".