Ensign Gates
Excelsior crewman
Dead body
Joycelyn "Joyce" Robinson Agu (born 4 July 1960; age 61), who is also known as Joyce Agu, is an actress and stunt actress who portrayed the role of Ensign Gates in several episodes of Star Trek: The Next Generation. She also performed stunts in Star Trek VI: The Undiscovered Country, where she received credit as Joycelyn Robinson and served in addition as stand-in and stunt double for Iman. Robinson received no credit for her television appearances.

In the early '90s, she did a promotional tour for Star Trek: Deep Space Nine where she portrayed Ensign Gates and appeared alongside fellow Star Trek extras Cameron (as Kira Nerys), Tracee Lee Cocco (as a Ferengi), and Michael Braveheart (as a Klingon). Beside her work as Ensign Gates, Robinson also worked as stand-in for several guest stars such as Kim Hamilton in the episode "Final Mission", Lanei Chapman in the episodes "Galaxy's Child", "Night Terrors", "Relics", and "Schisms", Fran Bennett in the episode "Redemption II" and April Grace in the episodes "Galaxy's Child" and "The Perfect Mate". Robinson was again scheduled to work as stand-in for Fran Bennett on the fifth season episode "Unification I" but was out when Bennett was replaced by Karen Hensel.

According to the call sheets, Robinson was scheduled to appear in the fourth season episodes "First Contact", "Qpid", and "Redemption" in scenes on the bridge but was either not filmed or cut from the final episodes. She also filmed scenes for the fifth season episodes "Redemption II", "Silicon Avatar", "Unification II", "Violations", and "Conundrum" but did not appear in the aired versions. Robinson filmed scenes at the conn for the episode "The Perfect Mate" but was out of the camera focus and thus not part of the aired episode.

Robinson Agu was born in Mississippi and raised in San Diego, California.

In 2005, she was the winner, along with her then-husband Uchenna Agu, of the seventh season of the popular CBS reality program The Amazing Race. They later returned for the eleventh season, Amazing Race: All-Stars. 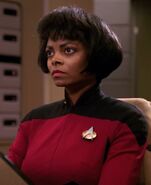